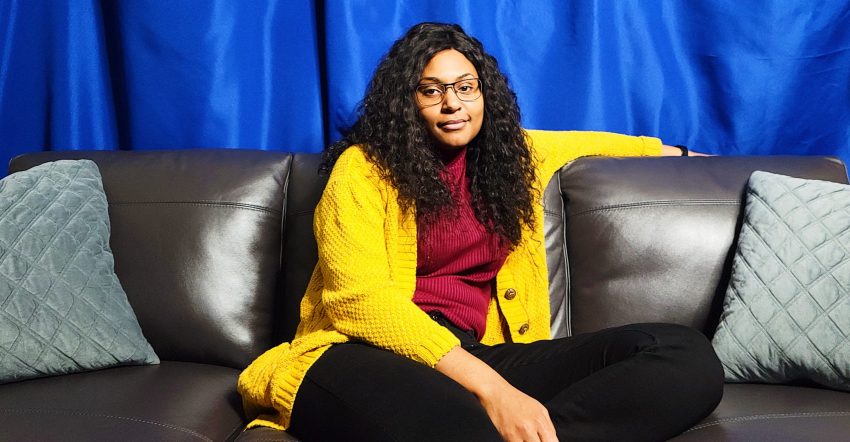 Shayla McDaniel is a singer-songwriter/multi-instrumentalist based in Knoxville, Tennessee who crafts guitar-driven alt pop.

Growing up, McDaniel began learning bass at church where she would accompany the gospel choir. She took part in elementary school orchestral programs and also experimented with multiple instruments in her parent’s basement.

In 2017, she played her first show and has been pursuing a professional career ever since. Earlier this month, she reached an important milestone for any artist – she released her debut full-length album Take Care.

McDaniel’s vulnerability on this record is one of its greatest strengths. Her willingness to write about emotionally resonant subjects makes every track all the more captivating.

The album includes jazz, funk, and soul influences and weaves fresh sounds together in a thoughtful and creative way, marking it a debut album to be proud of.

It was an absolute pleasure to speak to McDaniel about creating her debut album, the artists who have influenced her sound and what we can expect from her in 2022…

Have you always been passionate about music? Was there a particular song or performance that made you think “Wow! That’s what I want to do!”?
Yes, for the most part I’ve always been passionate about music. I remember when I was little, always wanting an acoustic guitar. I saved up some Christmas money and got one when I was about 13, and here I am now, still rocking strong. 🙂

Which artists have the biggest influence on your sound?
This is a great question! I listen to a lot of indie pop, rock, and alt R&B and soul, but I can’t pinpoint anyone in particular. I’ve had people tell me that I sound like if John Legend led an indie rock band.

Did you enjoy the process of making the album? Any challenges? Favourite parts?
I LOVED making this album! I got stuck on a few songs, trying to figure out the arrangements of the different parts for each instrument. What I usually do is save the file, go work on something else for a few days, then come back with a fresh brain. It seems to always do the trick!

What song would you choose from your album to introduce people to your music and why?
It would be ‘What I Need’. It’s a pretty vulnerable and honest song that’s still pretty upbeat and a bop. I think it showcases some of my fun guitar skills too hehehe.

Then out of all the tracks on your album, do you have a favourite? If so, can you explain why it is your favourite?
I don’t really have a favourite. It changes from time to time, like, one week it may be ‘What I Need’ but the next it might be ‘Let Me Breathe’.

Is there a theme that runs through the album and can you explain what inspired this record?
The theme/message is to take care of yourself and of others. I read through all the lyrics and listened to the tracks. The line “The only time you have is now, so take care of yourself” from the song ‘Better Days’ stood out to me, and seemed to really make sense for this project.

If we were to look at the artists you are listening to, who would be on your playlist?
Joseph, Lianne La Havas, Chastity Brown, Deep Sea Diver, Latir, Amber Mark.

What song has impacted you most throughout your whole life?
The hymn ‘Amazing Grace’. I thank God for blessing me with the gift of music, and without Him, I’d be nowhere.

What can we expect from you within the next six months? Any releases planned? Future gigs?
I’ve got a couple songs coming out later this month and in the spring. I’m booked for an outdoor festival later in the spring, but with the virus, we’re keeping our fingers crossed.

Let’s keep in touch on socials! I’m @ShaylaRMcDaniel on all of them. I’m most active on TikTok & Instagram. Since the algorithm is so dodgy, you might not see the big announcement posts, so you can sign up for email or text alerts for new music & shows here.