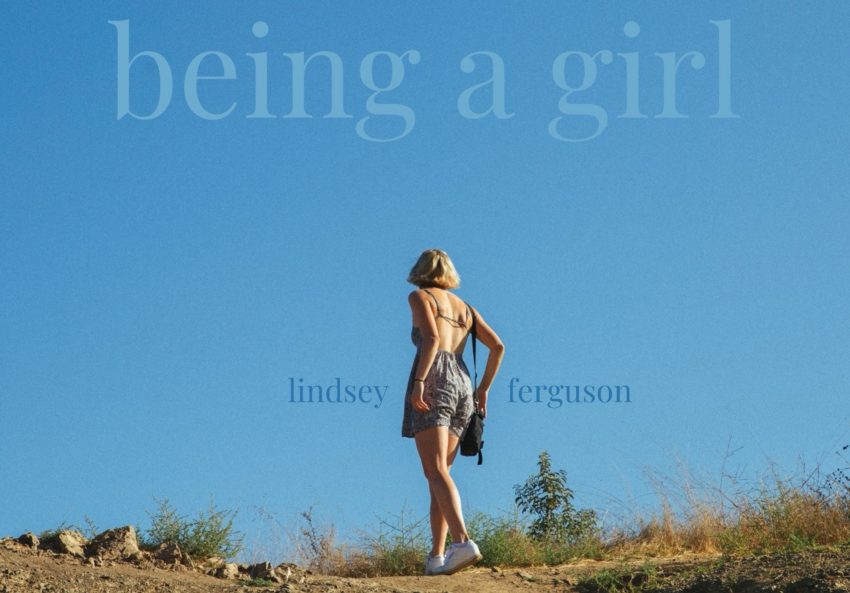 Lindsey Ferguson is a 26-year-old singer-songwriter, painter, and filmmaker from Pennsylvania. She has recently released her new album being a girl and it is nothing short of extraordinary.

It is a deeply personal look into the past three years of the singer’s life. She explores more than one heartbreak, coming to terms with her clinical anxiety and depression, living with her parents in quarantine and meeting her fiancé.

Ferguson’s vocals are emotionally resonant and incredibly versatile. She weaves beautifully between different feelings and moods and floods each track with an intensity that is arresting and profound.

The album is intimate and each track so varying and creative that it really distinguishes Ferguson as an artist to watch!

It was a pleasure to chat to Ferguson about the creation of the album, sleep-walking and her musical resolutions for 2022…

Who or what first got you involved with music/song-writing?
Well, I’ve been singing since I could talk (earlier, perhaps?), and my parents encouraged me to follow my interests. I started taking voice lessons from a wonderful woman named Olga when I was eleven, then I became involved in the local theatre company and was swept up in a world of Broadway showtunes for the next eight years or so.

In that time, I began writing my own songs, even beginning a musical called ‘Chasing Eric Dowan’, about a missing man or something…I didn’t get too far with that one. It was really in college when I began writing songs on a regular basis. I’d learned enough guitar to accompany myself on simple pieces and now had access to the music practice rooms on campus, each equipped with an upright or baby grand.

I spent most of my time in those rooms. I actually sleep walked there once in bare feet and a t-shirt. Public safety found me standing at the locked entrance (it was at least 2 am), but strangely enough, they unlocked the building for me and let me in! It wasn’t until I reached the practice rooms that I fully awoke and realized that I’d have to walk back to my dorm with no pants and no keycard. All for the love of music, right?

What music did you grow up listening to and which artists had the biggest impact on your sound?
Regina Spektor is always the first to come to mind. I was obsessed with her music. I’m the youngest of three daughters, so I listened to whatever my sisters listened to, and thank god they liked Regina. I also saw Mamma Mia with my family twice at a very young age and would often sing along to the soundtrack with my family, and so I sometimes find myself channeling ABBA when I write. And then, of course, there are all of the other Broadway soundtracks that I belted to in the car, in the living room, in the shower, and on stage.

Did you enjoy the process of making your album? Any challenges? Favourite parts?
The songs in this album were my saving graces over the last four years. There were a lot of moments and periods of that time that I very much did not enjoy, but writing those songs helped me to give the hard times meaning and the good times a way to celebrate.

I loved going into studios and meeting new producers, so much so that I fell in love with one of them and now we’re engaged! And then, in the more recent tracks, I got to learn how to produce myself…which was challenging and is nowhere near a finished product, but I’m really proud of myself for putting out music that I made all on my own.

Were you nervous to share tracks that are so personal and detail very intimate moments from your own life?
Honestly, no. I’ve always been what my family calls an “over-sharer” – I get it from my mom – and I figure that maybe some people are just meant to over share, to put all of themselves out there, so that others can find something in what they’ve shared and think “hey, me too!”. It feels good, I think, to find that.

Why did you choose to include narrative interludes throughout the album? How do you feel they enhance the album?
Once I’d arranged all of the tracks, I gave the album a listen and thought that it leaned more towards a narrative story arch than I’d expected. I was a creative writing major in college, and I’ve always been a big reader. I’d also just finished reading The Power of Myth by Joseph Campbell, which spends a lot of time talking about the “hero’s journey”. It’s a beautiful archetype that shows up in almost all mythologies, religious texts, and modern stories as well, that tells of a person who is presented with a challenging path that only they can walk.

Typically it’s first refused, then the hero seeks some loophole or way around the challenge, and eventually resolves to walk the path as best as they can. It changes the hero and gifts them with something (wisdom, an elixir, an answer to a question) to bring back home.

I’m not trying to call myself a hero – but I have walked a specific path with specific challenges that only I could face, as we all do, and I like to think that the gift I bring back home is this album. It is my very long way of saying that I wanted to tell an epic story, and I felt that it was important to establish a setting with the spoken interludes.

Of all the tracks on the album, which would you play to people first and why?
This answer changes daily. Today, I say ‘Hotter Than a Pistol‘, because I’ve been listening to it a lot myself and I think it rocks. It’s a fun song, I think.

Does living in LA inspire your music? What do you love most about living in LA?
Absolutely. My neighbourhood, in particular, feels like an artist haven. I’ve never lived somewhere where people are so open to talk to strangers and support each other. My fiancé and I are musicians as well as painters. We put on an exhibition in our house, and stuck up posters around the neighbourhood. We didn’t know what to expect, but we were overwhelmed when maybe ten neighbours who we’d never met before came to see the art, some even bringing gifts! The people here certainly inspire my music, as do the mountains.

Do you have any musical resolutions for 2022?
Yes! My fiancé Jordan and I really became so close because, after working on ‘Let’s Play Pretend‘ and one other song remotely, we decided to continue making music together and eventually formed a band. We’re planning to release our debut album early this year, and my goal is to form a team of passionate people who believe in our music and want to help us share it.

What can we expect from you within the next six months? Any releases planned? Future gigs?
You can expect at least one more album, not a solo album, but a spirited live album called Alive in Los Feliz by Ned and Wendy the Band on which, I sing lead vocals to songs that I wrote with Jordan. I’m also working on another album based around a Leonard Cohen-esque song that I wrote called ‘Vitium’. If all goes as I hope, it will be a very haunting album. Maybe a Halloween release? All in all, you can count on more music from me this year.

To keep up to date with the latest news from Lindsey Ferguson, you can follow her on Instagram and Linkedin. To listen to her latest releases, head to YouTube, Soundcloud and Spotify.