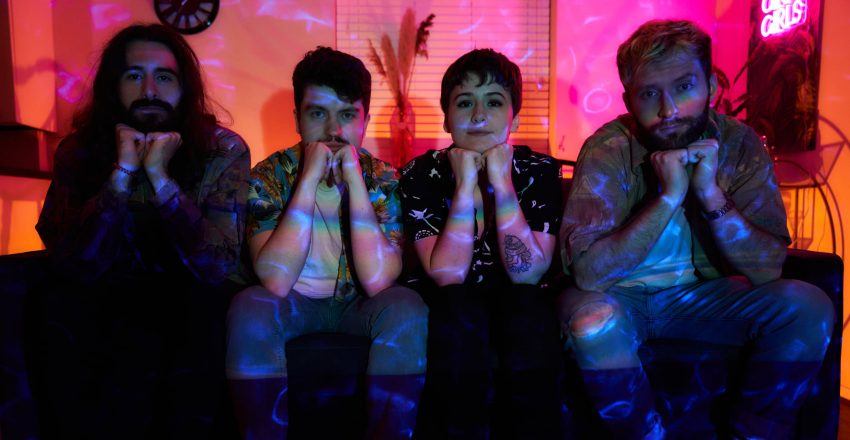 Low Girl recently released their brand new alt-pop track ‘So Cool’ which is the lead track off their upcoming EP, set to be released later this year in March.

‘So Cool’ was recorded between lockdowns with Michael Smith (Bess Atwell/Wolf Alice) and is the first of three singles that will be released ahead of the EP.

The track is bursting with vibrant synths, dreamy vocals and punchy rhythms and has a retro vibe that is both uplifting and captivating.

Previous tracks have dealt with themes of loneliness, mental health and identity dysphoria such as ‘Big Now‘ which was included in a several editorial Spotify playlists, playlisted by 6Music and featured on Radio 1 and Radio X.

‘So Cool’ explores the idea of wanting someone who seems unattainable and the feeling of infatuation that settles in as you try to figure out where you stand with them, echoed in the relentless and hypnotic melodies and beats throughout the track.

When did you decide to start creating music? What inspired your decision?
When I was 12! I was really inspired by The Beatles and I guess I decided that I wanted to write my own songs and see if they made me feel as good as listening to someone else’s.

Can you tell us about the story behind your latest track ‘So Cool’?
I wrote this about my girlfriend, but it was written before we got together when I was pining after her. We talk about it now, and she admitted to being pretty up and down with me because she was conflicted – and the track basically encapsulates that feeling of not knowing where you stand with someone.

What can we expect from the other tracks that will be on your upcoming EP?
You can expect a mix of upbeat bops with sad lyrics and some very honest and vulnerable ballads. In the lyrics, I really challenged myself to be honest about the parts of myself I often mask for strangers.

What are some of your biggest creative drivers when it comes to song-writing?
If I’m writing by myself, it usually comes from a really unhappy place. Those ruts often drive me to create because I need to express myself to get some relief. Alternately, when I’m writing with the boys, I’m usually having the time of my life goofing around with them in a rehearsal space. That probably explains the polarising sounds.

Can you describe to us how your creative process has evolved since you started writing your own songs at the age of 12?
I’ve definitely opened up more to the idea of collaborating – which I used to be a bit of a control freak about. I also didn’t believe I could do anything outside of acoustic/lo-fi/folk stuff before. But working with the boys gave me the confidence to be more ambitious with my writing. I still like to write ballads, but it’s also really fun experimenting with different genres and putting on a persona almost.

How does it feel to have your music played on the radio and featured on editorial Spotify playlists?
It’s indescribable! For an unsigned act on a shoestring budget, it’s insanely helpful to be able to have the support of the BBC and Spotify. We all met up and had a big ol’ celebration the other day (and by that, I mean meekly sitting in the corner of a very rough pub). On the other hand, I get such bad imposter syndrome from time to time and assume everyone is thinking I don’t deserve it. I’m trying to change how I view those things, and not let it override the elation.

Who would you most like to collaborate with and why?
That’s so tough but for me personally it would be Rostam. He’s produced some of my favourite albums and I adored his solo work – and of course, Vampire Weekend.

What piece of music do you wish you could erase from your mind so that you could experience it for the first time again?
Probably I Know The End by Phoebe Bridgers. I was covered in goosebumps when I first heard that track. I was really choked up towards the end of it and I can’t quite pinpoint why!

Do you have any musical resolutions for 2022?
I do! I say this every year but I really want to be more comfortable on stage. I want to be as carefree as I am when rehearsing and just believe in myself a bit more.

What can we expect from you within the next six months? Any releases planned? Future gigs?
We have some bops in the works that I’m pretty sure will see the light of day this year! We’ve also got SXSW and a March tour which is super exciting as we’re going to places we’ve never performed in before. Things are just really coming together creatively and I’ve got a good feeling about it.