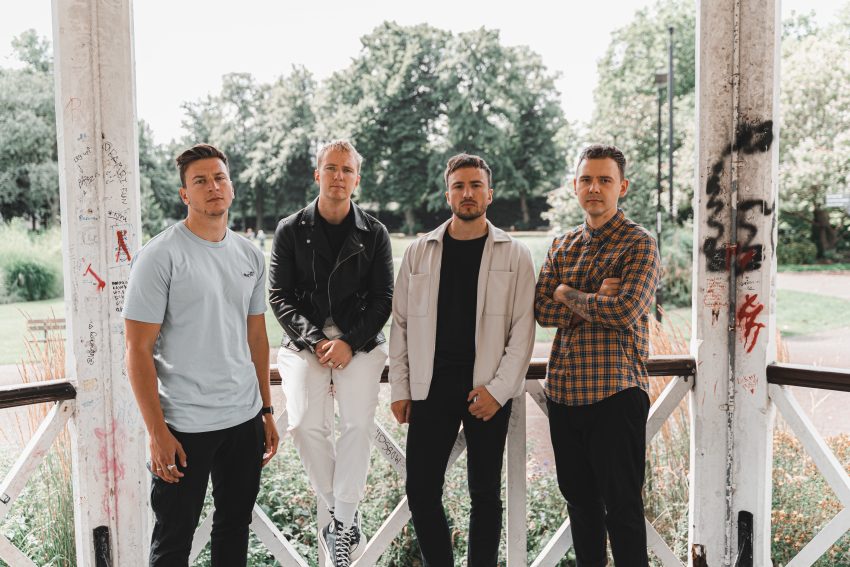 Oblivion is a standout EP that showcases the incredible talent of the band. Even though some of the tracks are barely more than two minutes long, each one is incredibly polished, unique and full of surprise musical elements.

It is bursting with electrifying, high-energy choruses that are crying out to be played live to packed out venues with crowds singing at the top of their lungs and dancing until the sun comes up.

The band never fail to create melodies that are invigorating and their instrumentation taps into a nostalgic feel that brings a certain magic to the band’s music, perfect for the long summer nights that you wish would never end.

When I first discovered the band, as well as falling in love with their infectious sound, it was also their striking lyrics that really drew me to their music. Oblivion does not disappoint and is flooded with the honest and down-to-earth lyrics that make this band so special.

One of my particular favourites is the following line from ‘The Absence Of You’, “Norfolk breeze comes through my window, I hold myself between the sheets in the morning glow and I ponder all the things I should do. But in truth I’m still lost in the absence of you.”

The entire EP is confident and refreshing and there is something captivating and raw within each track, making it a must-listen for any indie music lover. I can’t wait for the EP to be released next week for everyone to hear!

Where and how was your debut EP Oblivion recorded?
It was created during the isolation of the pandemic. We wrote songs together from our separate houses by creating demos in music software Logic and then pieced it all together with a big 6 hour rehearsal before getting the thumbs up to head back into the studio in April!

It was predominately myself and Ross bouncing ideas both and forth with each other and I think in the end I wrote around 30-40 songs before settling on the 6 we wanted to feature on our debut EP.

How do you feel the tracks on Oblivion fit together lyrically and sonically?
I don’t think the group of 6 songs fit that well together actually! There’s a lot of different ideas in each track and we recorded them with that intention. A few people have said to us before that we ‘haven’t found our sound’ and ‘the songs sound different’ but you know, I love that. I like the fact that we are able to switch it up, the only factor of our music that stays the same is that it’s the four of us. And that’s fine by me.

I like the way we create things and don’t limit ourselves to being a rock or indie band, we take influences from all over the place and that’s why we can adapt our sound. Lyrically, there’s lots of different feelings and emotions in this one, so they come from many different places including heartbreak and deep sadness, all the way through to the anger I felt towards political figures in the UK – so a lot to digest really!

Why did you decide to call the EP Oblivion?
Oblivion was by far the most exciting track we had in our opinion, it felt like it was something big and that’s exactly what we wanted from the title and final track. The riff that ends the track ‘Oblivion’ and EP came first before we actually wrote the song so we knew it had to build. I love the lyrics in that one, it was written during the aftermath of the murder of George Floyd and how the world was gripped.

I was listening and learning intently as a lot of these issues never came to my mind because of my privilege. I was pretty ashamed and embarrassed truthfully that our country has some really dark and bleak history that is brushed under the carpet and ignored. Some wonderful history too of course, but that seems to be the only history that finds its way to school textbooks.

You released the track ‘Absence of You’ as your first single release from the EP. Why did you choose this track and what do you love most about it?
This felt like perhaps the strongest single. It has a great beat and really clever guitar riff from Ross which makes it feel like a kind of ‘indie banger’. It’s a really strong song, it feels like we nailed what we wanted from it. Just 3 minutes to make you dance, I cannot wait to play it live.

What was the experience of collaborating with Emily Parish for your track ‘All The Same’ like? What does she bring to the track?
When I wrote ‘All The Same’ I always envisioned Emily would sing on it. This was the one where I think it was mainly myself over Ross dictating the track. The usual way it works is I create an idea and Ross is the one to top and change it but this one kind of flowed on its own. I love its simplicity. It’s the same drum-beat all the way through and it feels very ‘Tranquility Base Hotel + Casino’, which is what we wanted.

The lyrics stemmed from a bit of despair. I was going in and out of my head about not knowing what on earth I was going to do with my life. Covid threw up so many questions and “I miss my friends and they miss me” was essentially how I was feeling all the time. It was so difficult not seeing anyone, I missed the people close to me so dearly. During the pandemic I found Emily’s album How I Feel Now and I fell in love with her voice and song-writing.

When I pieced together ‘All The Same’ I actually envisioned it being sung all the way through by her and truthfully if she hadn’t been able to sing on the track I don’t think we’d have released it. She brought her wonderful voice for starters, and her harmonies in the ending chorus is probably one of my favourite moments on the entire EP. She took it to a new level and brought something totally new to us. She is an incredible musician and I really hope to work with her again in some capacity one day.

Which track on the EP are you most proud to have created and why?
That’s a tough question! It’s like choosing between your kids… but for me I’m going to say ‘The Absence of You’. I think it’s my favourite song of ours, and I loved the lyrical element. I think it got me through the break up of my relationship and I’d like to think when it was written it was the change of mind that allowed me to grow into a better musician and start loving what I was doing again. I think the production if it from our genius of a producer ‘Tom Joy’ was pretty much nail on the head too.

What has it been like to be a musician over the last year and how have The Islas been impacted?
You know it’s been really tough not being able to gig or see each other, but as a songwriter it’s created a lot for me and the band. Having that time to sit and create with my guitar hadn’t been possible for so long so I am really pleased with that aspect but I’d be lying if I said it hadn’t been extremely difficult at times. Things are coming back to normal here in the UK which I love and we cannot wait to take to the stages again.

Later this month you are going to be headlining your first show in over two years at the Voodoo Showroom! How are you feeling ahead of that performance and how are you getting ready for it?
It’s going to be insane. I literally cannot wait. It’s been the one show that’s been keeping me going for so long truth be told! It’s looking like it may even sell out which is wonderful and we’re backed by the awesome Wild Paths team too which is great for us and our fine city of Norwich! We’ve been rehearsing a lot and making sure we have a really solid set so it’s excellent to have these shows back. I feel like we’ve shaken the rust off now, so we can really dig our teeth into something new.

Which tracks from the EP are you most excited to perform live and why?
I think ‘Oblivion’ is the one that sounds best live. It has a really good beat throughout the whole song and feels raw and strong. I love the outro riff from Ross so I think that’s the one people are going to enjoy hearing most. It’s certainly one I won’t be able to stand still playing!

Besides the release of Oblivion, what else are you planning for the rest of the year?
A tonne of gigs, really pushing the EP and who knows – maybe even another sneaky release before the year is out! But we really want to get this EP as far and wide as we can, so we just want to get into venues and be as active as we can on socials and really push people to our Spotify! We feel like we have a good catalogue of music now, and we’re hoping to break through as one of the UK’s most exciting up and coming new bands!