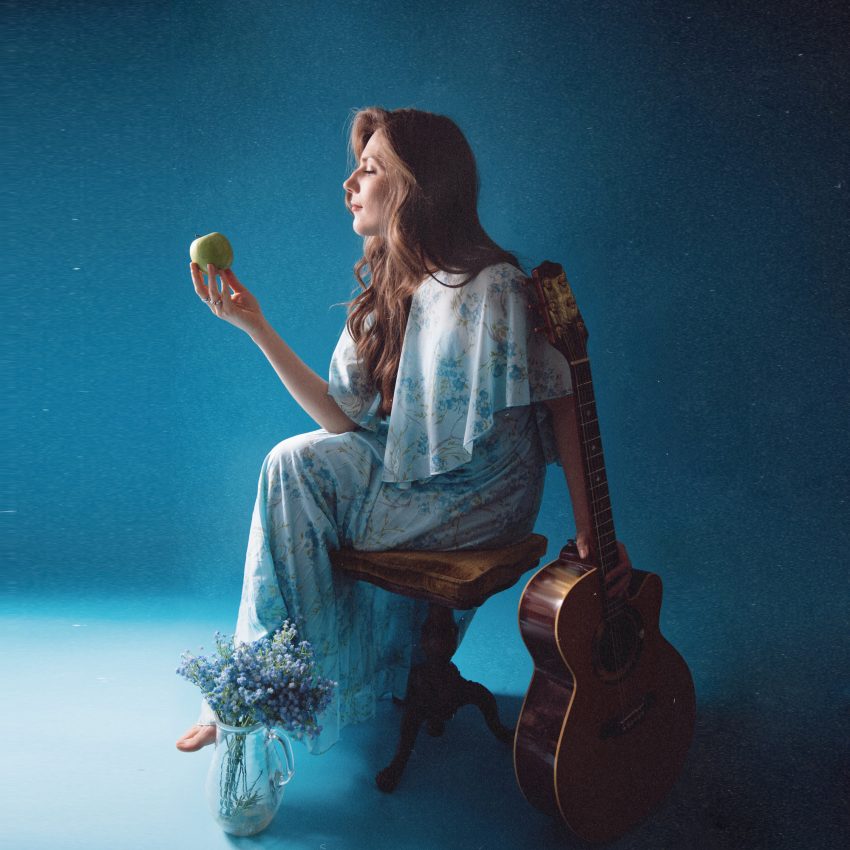 Kaylyn Marie is a multi-genre music maker and performer. Her work has led to becoming an alumna of Joe’s Pub’s WG, an Amish witch on Lifetime TV, a protest singer in Steven Spielberg’s ‘The Post’, and a finalist on American Idol.

She has recently released her sophomore EP Forget Me Not which follows the journey of a woman who starts out on the cusp of leaving an abusive relationship and goes onto discover who she is on her own and realises she is worthy and capable of love.

Over five tracks, we follow her progression from a world of chaos to the joy of acceptance and self-love. With her heartfelt and poignant sound, she captures the emotional ups and downs of dealing with grief and ultimately overcoming it.

It was a pleasure to have the chance to chat to Kaylyn about her new EP, the music she grew up listening to and her creative process…

Why this record? What inspired it?
Forget Me Not tells a difficult story. It starts with a woman on the cusp of deciding to leave an abusive relationship. Fortunately, she does. Once gone, she begins the journey of discovering who she is beyond being “someone’s someone”. She makes many mistakes and questions herself often but by the end of the record, she realizes that the wealth of love within her is not only hers to give but also hers to take. Yes. A story of genuine self-discovery and self-compassion; hence the (oh-so-on-the-nose) title: “Forget Me Not”.

Can you briefly describe what each song is about?
ONE YOU HAVEN’T USED: When you want them to say “I’m sorry” but in the waiting and wishing you come to realize – you need to forgive them and take your time, heart, and healing into your own hands. A letter one writes to deliver but realises it is more for oneself.

AT WORK: When there is love but, it is unhealthy, it is not to be built upon, it is not “at work” and one ever so gently begins to say goodbye. A last dance.

FINALLY : You know when friends or family describe you positively to others and you think, “Wow. Is that really how they see me?”, because you’d never describe yourself with that much enthusiasm or admiration. ‘Finally’ embodies the first moment you catch a glimpse – and if you’re lucky, begin the habit – of seeing yourself as kindly as your loved ones see you. A return to home.

Who or what first got you involved with music/song-writing?
When I was 14, my mother handed me my stepfather’s guitar and said, “I had a dream that repeated “Kaylyn has long fingers she should play the guitar”. At the time, I was a Britney Spears and N*SYNC fanatic so the idea of learning an instrument was not primary — making up dance routines with friends was primary.

Nevertheless, I started to tinker around and happily lost track of time. I sincerely fell in love with the guitar and began writing songs almost immediately. The catharsis I felt from writing kept me steady through tumultuous times and remains to be a method of grounding myself whenever life throws it’s curveballs.

My first performances were at age 15 in a church basement in Maryland and a snowball stand in Pennsylvania. It wasn’t until I was in New York, finishing my Bachelor’s and pursuing theatre, that performing music accidentally became my utmost pursuit. I’d been writing daily and performing occasionally since the snowball stand days but it I had yet to routinely perform music untiI I began working at Joe’s Pub at The Public Theater — an incredible music venue in the East Village.

At Joe’s, they had a staff talent show, and I didn’t want to perform a monologue, so, I sang a song I’d finished writing that day. Fortunately, the song was well received and soon after, my boss said: “You should play a show here!”. I was dumbfounded, considering the talent I witnessed on that stage. Could I really play Joe’s Pub? It turns out, I could and I did. That first show was one of the most surprising and encouraging nights of my life.

Chatting with the audience after — hearing their stories — hearing they were motivated to do their thing after seeing me do one of my things — it was powerful. It was a pivot moment. In the course of that evening, I decided I was going to prioritize performing my music and I began planning for my first EP, “Where I Need”. I’ve, actually, recently had another pivot moment.

During Covid-19’s quarantine, I was invited to help veterans write songs via an online song-writing retreat courtesy of Warrior Music Foundation. It opened my eyes and heart to a new professional pursuit: Music Therapy. I’ve been curious about music therapy for a while but this was my first foray, meeting and working alongside music therapists. It rocked my world. So, I’m happy to share, I am beginning my graduate studies as a music therapist this fall!

What music did you grow up listening to and which artists had the biggest impact on your sound?
I grew up listening to the radio – Top 40 but also “Oldies”. I acquired quite a variety of preferences from Etta James to Billy Joel to Stevie Wonder to Celine Dion to Ani Difranco to Nirvana to Jewel to Britney to Foo Fighters to Beyonce to Cage the Elephant to Adele, the list is endless and far from linear. My father was and is a big Cat Stevens and Bob Seeger fan so, if there are any voices that reminds me of my childhood, it’s definitely Sir Stevens and Sir Seeger.

What has the process of making the EP been like? Any challenges? Favourite parts?
This entire EP was tracked and produced by two women – my producer, Katie Buchanan and me. It was really quite refreshing to keep it to us two. Katie is brilliant and an inspiring collaborator to say the least.

Do you have a favourite song on the EP? Or a favourite lyric? Why?
Honestly, I sort of see the whole EP as one big song with crazy dynamics, lyrics are interwoven and melodies resurface. It’s truly a story record. I’m grateful for and proud of each nuance that gives the EP her wholeness. I will say this though – my favourite part of the story is how it ends.

Can you describe your creative process?
It is wild and free and changing constantly. There are moments a lyric will come to me and I’ll sit at the piano and let that lead. There are other moments a melody will stick in my mind and I fill it with gibberish until the words decide to arrive. My music is confessional and reflective toward whatever I’m presently discovering or coming to terms with. I rarely create out of context from where I presently stand in my life.

Who would you most like to collaborate with and why?
I would positively keel over if I ever had the chance to work with Joni Mitchell – even if the work was grabbing her tea or coffee. That’s a constant daydream. I would love the chance to simply say “thank you”. Her willingness to write honestly in a time where polish was (and still is) available encourages my authenticity to take the lead when I sit down to write. As a result, I learn something new with every tune.

Do you have a dream festival or venue that you would love to play at? Why?
Like every music maker, I dream of playing Red Rocks and Newport Folk Festival. They’re gorgeous places with so much history that fascinates me.

Who’s your go-to band or artist when you can’t decide on something to listen to?
Either Lord Huron or Louis Prima. It supremely depends on how indecisive I am as both go-tos are inordinately different.

What can we expect from you within the next six months? Any releases planned? Future gigs?
I am beginning my graduate coursework in August and that will take priority for a bit BUT I have a new record with my band project “The Wildlings” nearly ready to be shared. Aiming for those tunes to be out and about in 2022 and I’m in pre-production for my next solo EP. So, nothing concrete to report just yet but, a lot in the works.