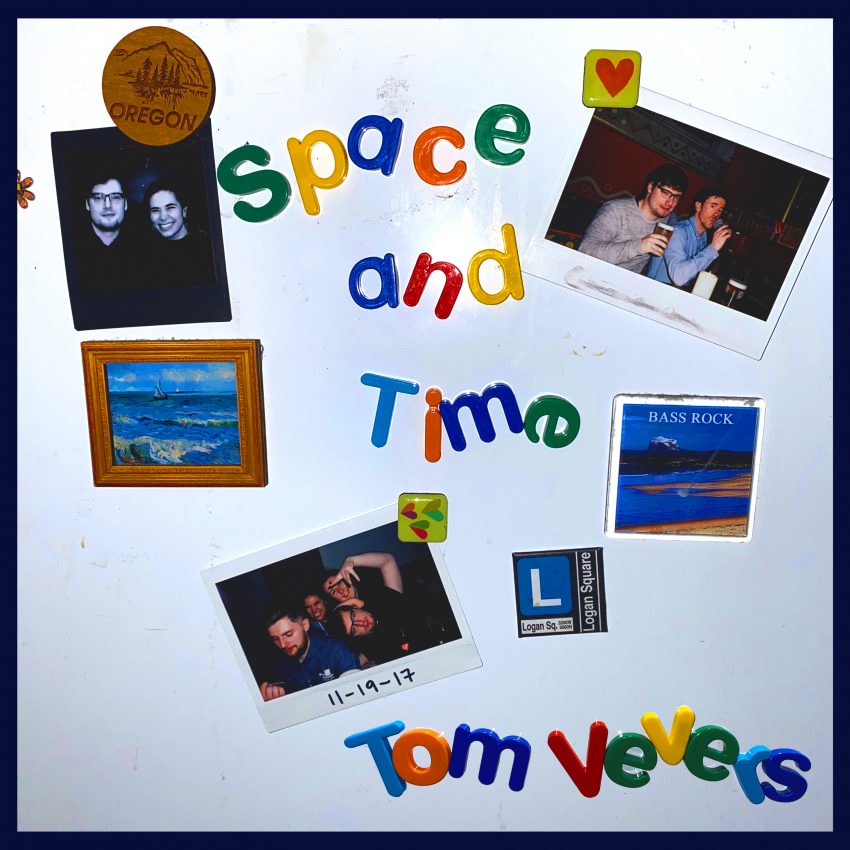 Scottish singer song-writer Tom Vevers takes a ‘heart on his sleeve’ approach to song-writing, dealing with topics such as love, life, loss, growing up and mental health.

His vulnerable and honest lyrics lie at the very heart of his work and combined with stunning and emotive melodies and raw vocals, Tom successfully creates music that you can’t forget.

Tom recently released his self-produced album Space and Time which he crafted over the past year. The album is about the artist’s mental health struggles during that time, about grief, about relationships and life.

Ultimately, the creation of the album has been a cathartic experience for Tom and he hopes that his music can allow listeners to relate to his struggles, to understand things more deeply and to transport people somewhere else, even if just for a few minutes.

These tracks are mature and accomplished and deserve to be celebrated for their moving intimacy, powerful honesty and beautiful instrumentation.

It was a pleasure to speak to this talented artist about his new album, the track he was most nervous to release, his favourite musical memories and future plans…

How did you first learn to play/to sing/to write?
My big brother taught me how to play guitar when I was about ten or eleven I think. The first song I learnt to play was Don’t Panic by Coldplay; four chords and super easy to learn. From there, I just found a song that had those same four chords and maybe another couple then learnt those.

Gradually, I just built up my repertoire and was playing loads of different songs. I didn’t start writing until a bit later on. I was maybe about 12 or 13 when I started writing stuff. It was all just sappy love songs. My family have always been pretty creative and I guess have just inspired the same creativity in me. Writing was just something I started doing; singing too. Before I knew it, I was writing my own songs regularly.

Who are your main musical influences and why?
I’ve always wanted to write songs that tell a story; whether that’s something about me, an idea I’ve had or even just trying to process some abstract feeling. I always want my songs to be about something that means something to me. In that regards, I’ve always loved songwriters who when listening to their music I instantly feel something or understand what they’re singing about.

People like Joni Mitchell, Jeff Buckley and Phoebe Bridgers are the kinds of songwriters who are masters at conveying emotion through their music and telling stories whilst also creating incredible melodies and vocals in their music.

I’m also a huge metal fan and for people who aren’t, I think it’s easy to dismiss those kinds of bands as just angry noise but some of the most beautiful songs I’ve ever heard are heavy, tuned down metal songs. Bands like Slipknot, Knocked Loose and A Wilhelm Scream just wear their hearts on their sleeves and their music is just pure, raw emotion. I always strive to push that level of emotion into my own music even though it’s pretty different musically from those kinds of bands.

Can you describe the process of creating your debut album? Any favourite parts? Any challenges?
In March 2020, when the first lockdown started in the UK and I realised I was going to have a lot of spare time on my hands, I said to myself now would be a good time to start working on a new EP. I got a computer from a friend and had some equipment in my bedroom so just got started with recording. I decided early on that I wanted to do everything myself just as a personal challenge. I’d write, record, mix and master everything.

I just started recording and by the time I’d finished I had seven tracks so just thought I might as well just release an album so that’s what I did. One of my favourite parts of recording the album was recording ‘Always On My Mind’. I started with just an accoustic guitar and vocals laid down and this was the first song I worked on. I accidentally stuck a distortion effect on the acoustic guitar track and it had this really grungy sound to it. I then thought, “why not just do a full band recording?”. Drums, bass, piano, synths – I wasn’t going to be gigging any time soon so recreating it live didn’t really matter.

It was a great moment because I’d felt quite restricted but making that decision to open up the album instrumentally, created loads of new opportunities for potential sounds and styles and just made the album a much more exciting prospect. It could really be anything I wanted it to be.

The main challenge was just learning all of the elements of the production process I hadn’t had a hand in before. Mixing and mastering had usually been done by other people. It was challenging trying to learn on the job so to speak but having so much time on my hands made it easier. There’s certainly nothing more rewarding than listening to a finished track, having that eureka moment and knowing it’s done. Even more so when I’ve taken the song from start to finish.

What is the story behind your new track ‘Always On My Mind?
A lot of the songs on this album are about mental health and loss and dealing with grief. I lost my best friend Stuart to cancer about five years ago and I really struggled with how to move on from that. Somehow I’d convinced myself that everyone was moving on faster than me and I felt bad that I couldn’t seem to. ‘Always On My Mind’ is about me trying to put up a front to convince people I was doing ok but really I couldn’t stop thinking about my friend and the loss. It’s about trying to pretend you’re ok when you’re not.

Out of all the tracks on your EP, do you have a favourite? If so, can you explain why it is your favourite?
I’m a big fan of ‘Underdog’. It’s my favourite partly because of when it was recorded and also because of where it appears on the album. It was probably the song that tipped this body of work into being an album rather than an EP. I finished ‘Underdog’ last, both in terms of writing and also recording. I’d recorded it and just really loved it. It’s just a very simple arrangement and it tells a really simple story. It just sort of came out of nowhere and surprised me. I also like where it ended up on the album. It’s a nice moment of quiet in amongst a couple of fuller band songs towards the end of the album.

Which song were you the most nervous to release on the album?
I think I was most nervous about releasing ‘2006’. It was the second single and definitely the song that sounds the most different to other things I’ve released before. Prior to this album, everything else has been mostly acoustic guitars and vocals. ‘2006’ is a real energetic indie dance song. I mean, it’s got cowbells in it. I think I was just nervous about releasing something so different and people thinking it’s an accoustic singer doing some naff electronic number. In the end, it seems people really liked the tune and it’s definitely one of the more popular ones on the album. It’s given me more confidence in experimenting with my sound; that’s for sure!

You are very open about your struggles with mental health. Do you believe that music can have a healing effect?
Absolutely! I wouldn’t be where I am now without music. I think if the last year or two has shown us anything it’s that no one is immune to problems with mental health. Everyone’s been isolated and cut off from their friends and families and dealing with those kind of stresses can be difficult. You need an outlet and that’s what I’ve always seen music as.

It’s a way for me to vent my frustration, thoughts and emotions and channel them into something creative and positive. It’s been a way for me to process the things that have happened and make sense of my thoughts and feelings. I think music is an incredibly powerful tool and those kinds of outlets are vital in dealing with any mental health issues someone might be dealing with.

It doesn’t have to be music either. Anything that brings you joy and allows you to have fun even if only for five minutes, can become an outlet for whatever thoughts or feelings you might be having. Music has been that for me. It’s all about finding what helps you cope.

How old were you when you wrote your first song and what was it about?
The first song I remember writing was a song I wrote about a girl I had a crush on at high school. I must’ve been 12 or 13 and I performed it a high school talent show, hoping it would be some grand romantic gesture but obviously had never seen a romantic comedy before and it ended up just being a big cliché. I would definitely say my writing has matured now I’m 27 but hey, everyone has to start somewhere.

What are your fondest musical memories? In your house? In your neighbourhood or town?
Sometimes when I’m writing a song, I don’t have the idea fully formed when I start out and it sort of just flows and lyrics just start writing themselves. Those are the ones that often end up being the most impactful and I end up writing about something I didn’t even know I was needing to vent about.

I wrote a song called ‘Moscow’ about a year after the death of my friend Stuart. It’s a song about him wanting to ride the Trans-Siberian Express which he had tickets for before he died and about doing things you’ve always wanted to whilst you still have time. It was a song about coping with the loss of someone before I had really figured out how to and it hit me like a tonne of bricks. I just remember being so shocked that at that time of mourning, this hopeful, optimistic song came out of me.

Another fond musical memory of mine, a bit of a Glasgow musician staple, but playing my first sold out show at King Tuts Wah Wah Hut, an iconic Glasgow venue, was pretty special. I was playing with Get Cape. Wear Cape. Fly who I’ve been a fan of for a long time so that just made it better. Getting to play that iconic venue with a great crowd and with another artist I’ve admired for years was a fantastic experience.

What can we expect from you within the next six months? Any releases planned? Future gigs?
Having now released the album after what feels like forever, and live music starting up again, the plan for the next year would be to get some live shows under my belt. I’m really excited about bringing these new songs to a live audience, potentially with a live band for the first time. I do want to start working on some music at some point but getting back to playing some gigs is the top priority.

I’ve got a wee Scottish tour planned and potentially a few gigs in London planned as soon as logistically possible which I’ll be posting on social media once I have more information. I just can’t wait to get back out there, playing in front of people again!