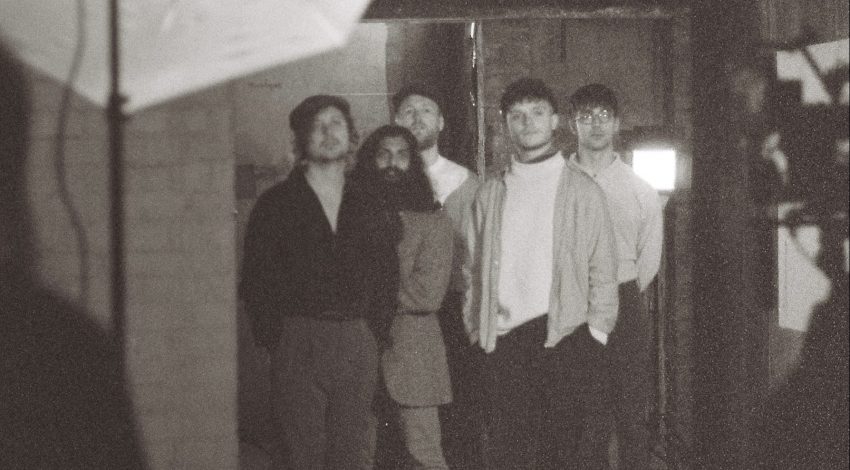 Their brand new track ‘Dance Laura Dance’ is a compelling and uplifting anthem. Jack wrote this song about Laura Weston’s battle with cancer, a truly inspirational story of strength and resilience, “a song for survival, an ode to the strong, an awakening.”

The track is heart-warming and joyful. It feels like a bright light and invites the listener to dance in the face of fear and let go of the pain you’ve experienced, “the scars are fading every day, you climb a little higher yourself”.

Through expansive vocals, moving lyrics and atmospheric instrumentation, Sleep Walking Animals have created a foot-stamping anthem that is stunning and memorable.

It was a real pleasure to have the chance to speak to their band about the brand new music, their creative process and the venue that they can’t wait to re-open…

How did you come together as a band and where did your band name come from?
We formed Sleep Walking Animals about 2 years ago (but you can trace the flame of formation further back as Joe and Tom grew up in Salford together). We were actually all studying acting at various universities around London. Writing and playing music became something to do in between acting jobs. It didn’t take long for us to decide to do it full time.

Maybe it’s a greater, more personal creative outlet for us. I guess it’s not unheard of for bands to form whilst pursuing something separate from music. It just happens that the thing we initially set out to study and make a career of still helps us loads within the band. Although most of us concentrate solely on music now, Tom still acts and has done some great stuff.

The name of the band comes from one of Tom’s lyrics, “driving me mad like a sleep walking animal”. It’s enigmatic, like most of our lyrics – Tom won’t mind me saying that. We went through a lot of names though, trying hard – maybe too hard! – to find one that sounded rustic and offbeat. As soon as we stopped trying, “Sleep Walking Animals” was just there right in front of us and it was probably the easiest decision we’ve made to date.

Which artists have the biggest influence on your sound?
I think we’re lucky as a band in that we have a lot of influences, and yet we’re all still driven and excited by a collective sound. Robin Pecknold of FleetFoxes comes up a lot, as does Damien Rice, Mumford & Sons… They’re direct influences of ours, in that they’re also acoustic guitar led folk, but we love any artist with a story to tell and a bit of raw drama or agony in their sound.

We’re of course inspired by classic Americana and Rock – tunes our parents listened to – and I also think we have this unconscious pull towards Mancunian bands… Elbow, James, even though two of our members are not even from the North! Then there are our individual, slightly more left field influences; Jack and Joe love Kings of Leon for example, Alex is a big fan of Tame Impala, Tom has this penchant for almost Renaissance sounding melodies – we have no idea where that comes from – and Nuwan brings his knowledge of world percussion.

What inspired your latest single ‘Dance Laura Dance’?
‘Dance Laura Dance’ was inspired by a teacher and close friend. She found out she had cancer and underwent treatment, and her journey of recovery and rehabilitation was beyond inspirational. As a teacher of dance, communication – both physical and verbal – were obviously so important and were momentarily taken from her.

Regaining what she had lost took unimaginable strength… and that’s exactly what it’s about, I guess – trying to comprehend the unimaginable. It’s a self examination as much as it’s an anthem of resilience and hope.

What do you love most about the track?
We all love the choral aspect of the song. When we recorded the harmonies, we collectively stood round a couple of room mics and just sang our hearts out. I think we surprised ourselves at how great it sounded, because usually you layer each of the vocals separately. That togetherness really translates, I think. It sounds like we’re all pushing towards something, it’s almost tribal, like we’re calling in a storm or something.

Can you describe your creative process?
Our creative process usually consists of Tom sending through a poem and then one of us putting it to music. Sounds simple, but I think there’s a uniqueness in the lyrics being formed without a predetermined melody or accompaniment. Jack writes a lot of the initial song structures and melodies, then Alex will add a killer guitar part and take the song to another level.

Joe might add new chord progressions and ideas. He’s also great on the production side, so has an ear for what the final thing could sound like when we record. Nuwan will try rhythms on different drums until we’re happy and add the highest harmony lines that even a choir boy couldn’t sing. It’s definitely a collective effort and sometimes everything clicks into place pretty much straight away.

Other times we’re making changes right up until the day of recording. Our process definitely isn’t set in stone. Jack wrote the lyrics for ‘Dance Laura Dance’, for example. I’d say we’re all quite conveniently good at being musicians, songwriters and producers, which helps when you’re self-represented.

What moment in your career so far are you the most proud of?
I think we’re all very proud of what we’ve done over the past year of lockdowns. It’s been difficult for a lot of people, us included, but despite all the hardship, we managed to write, record and mix our first EP and release 3 singles. Hearing your song played on Spotify and on the radio for the first time is pretty mint.

Which music venue in Manchester are you most excited to get back as venues start to open up again?
We’re playing the Night & Day Cafe in October, which we’re all excited about. Some great artists have performed there.

What is one artist that you think everyone should have to listen to? Why?
Al Morris is an artist we think you should all listen to. He’s a friend of ours, but we’re definitely not biased, he just writes really great, soulful, feel-good tunes. He’s also got an EP out soon – recorded at the same place as ours no less, Green Velvet Studios in Stockport.

If you could steal credit for any great song, which one would you claim and why?
Thats a really good question. Probably a really famous Christmas tune so we could get all the royalties.

What can we expect from you within the next six months? Any releases planned? Future gigs?
We have just released the video for ‘Dance Laura Dance’. It’s a collaboration with movement company State Of Flux, directed by Laura Weston and Brad Foster, beautifully shot by Alex Ryland-Jones and performed by Lydia McNulty. We’re all really proud of it. It accompanies the song perfectly and Lydia’s dancing in it is just brilliant.

We have our debut EP coming out sometime over summer, date TBC, and then a tour in October, so keep your eyes peeled for news surrounding that. We have also filmed a live church recording of the EP which will come out soon, just to wet your appetite. It’s unplugged and raw and tickets will be available online very soon, with some of the proceeds going to Cancer Research.