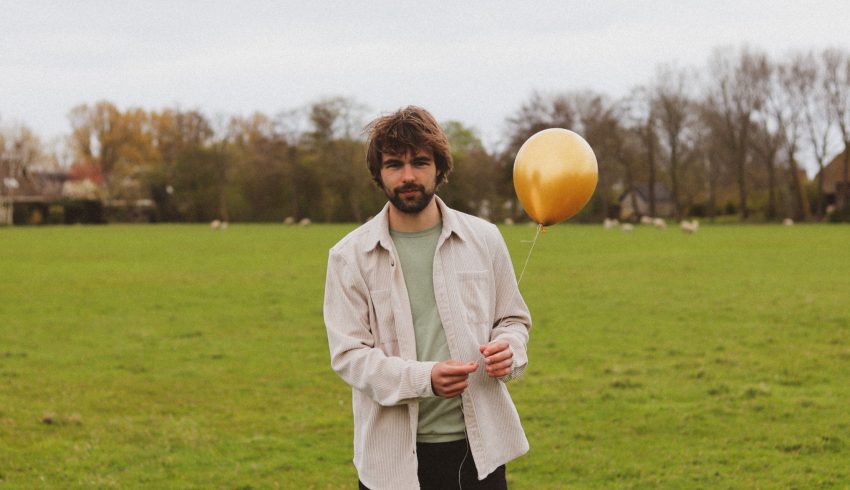 Dutchman Sven Ross was on track to become a primary school teacher when he decided to leave his studies behind and move to London in order to immerse himself in the song-writing scene and develop his musical craft.

Now two years on, the Amsterdam-based singer-songwriter has just released ‘Blue Birthday’, the second single from his upcoming EP ‘Filled with Gold’.

The track was written at the end of Sven’s 22nd birthday, after waiting in vain to receive a call from his ex, and it is a simple and moving accoustic song.

Sven’s voice possesses a beautiful warmth and depth and it feels comforting to listen to the track’s lilting melodies over gentle accoustic strumming.

It was a real pleasure to speak to Sven about his new track, what he learnt about song-writing in London and

When did you decide to start creating music? What inspired your decision?
My parents sent me to recorder lessons when I was seven, with the idea that music lessons are good for development and, if I liked it, I could choose another instrument after a year. I chose the guitar and have been playing ever since. It has never felt like a true decision to me. I just really liked making music, so kept going and started writing my own guitar parts, melodies, and lyrics when I was in my early teens. This was around the time Ben Howard and Ed Sheeran released their debut albums which inspired me hugely.

What did you learn about song-writing from the time you spent in London?
That it’s unmistakably related to life in general. I have never seen songwriting as a form of therapy or a way to deal with problems, but creating songs makes you learn so much about yourself. By giving permission to be fully honest with yourself, you can get the best out of your creativity. More explicitly, I learned a lot from receiving and giving feedback with fellow writers, forming collaborations, and being exposed to new writing tools.

Which musical artists have had the biggest impact on you and your sound?
It’s probably no surprise I’m mentioning Ben Howard and Ed Sheeran here, haha. Those two are really the first major inspirations. Other artists I’ve been inspired by are Jason Mraz, Rhys Lewis, SYML, Bastille, Sasha Sloan, Alec Benjamin, Anson Seabra, Lucy Rose, Angus & Julia Stone, and Vance Joy, to name a few.

What inspired your recent single ‘Blue Birthday’?
My birthday is at the end of March, so last year it was in the first weeks of lockdown. The sun was shining and there were no airplanes, so the sky had been clear blue all day. In the evening, I sang the words ‘it’s been a blue birthday’ and connected it to the fact my ex-girlfriend hadn’t sent me a birthday message.

On one hand, I felt sad about the fact she didn’t, but, because she didn’t, I started reminiscing about our time together, which evoked predominantly positive memories. So, the ‘blue’ in this song has both optimistic and melancholic connotations.

It is the second single from your debut EP ‘Filled With Gold’. What can we expect from your EP?
I guess the first two singles are, sonically, quite representative of the whole EP, with ‘Heart Against The Rocks’ being a more sophisticated, self-made production and ‘Blue Birthday’ a more acoustic recording with real instruments only. Broadly, there are three intimate songs and three recordings that are more expansive in their instrumentation.

Lyrically, the body of work represents a potentially never-ending cycle of events: from heartbreak, to healing, to new beginnings.

What do you love most about your new EP? Do you have a favourite track?
What I love most about the EP is the fact that it’s been created. Sounds cliché, but the process of making this has been a way to connect with so many aspects of life: from meeting new people and strengthening existing relationships, to learning a lot about the music industry and, perhaps most importantly, coming closer to myself. In terms of the tracks, my favourite changes from day to day, but I tend to say that over time I’m more drawn to the intimate songs on the EP.

Can you describe your creative process?
Sometimes I plan writing but new ideas always come spontaneously, whenever I feel like it. I usually start with a guitar riff or chord progression and then sing random words over it. I keep my ears out for interesting lines or words that appear, out of which I develop a lyrical concept. Usually, most of the guitar parts and melodies, plus the lyrical concept, exist within 20 minutes.

If it takes longer, I believe it is not meant to fall into place and then it’s better to move on to a new idea. Finishing the song could take weeks, though. And when it’s finished, it’s never finished. I value the feedback from other writers highly and therefore edit my ‘finished’ songs endlessly.

What songs hit you with a wave of nostalgia every time you hear them?
My mum had a couple of CDs she played a lot when I was young, with a few songs being very nostalgic to me now: ‘Forever Young’ by Alphaville, ‘Somewhere Only We Know’ by Keane, ‘White Flag’ by Dido, and ‘In The Air Tonight’ by Phil Collins, to name a few. ‘I’m Yours’ by Jason Mraz, which was the first pop song I started to play on guitar, gets me every time as well.

If we were to look at the artists you are listening to, who would be on your current playlist?
Lately I’m obsessed with everything that’s produced by Ian Fitchuk: Patrick Droney’s first EP, Kacey Musgraves’ album ‘Golden Hour’, and the new Birdy record. I don’t even have a playlist I listen to lately, apart from one called ‘Ian Fitchuk Magic’ because I can’t get enough of it.

What are you currently working on and do you have any upcoming shows?
Currently, I’m writing a lot of new music and I am, naturally, in the process of releasing my EP. Last week, I played in the preliminary round of the Dutch singer-songwriter competition ‘Mooie Noten’, alongside some amazing fellow Dutch artists. Unfortunately, playing live is not yet a possibility in the Netherlands. The showcases will be live streamed worldwide on YouTube, so everyone from wherever can tune in! I guess everything has its upside.