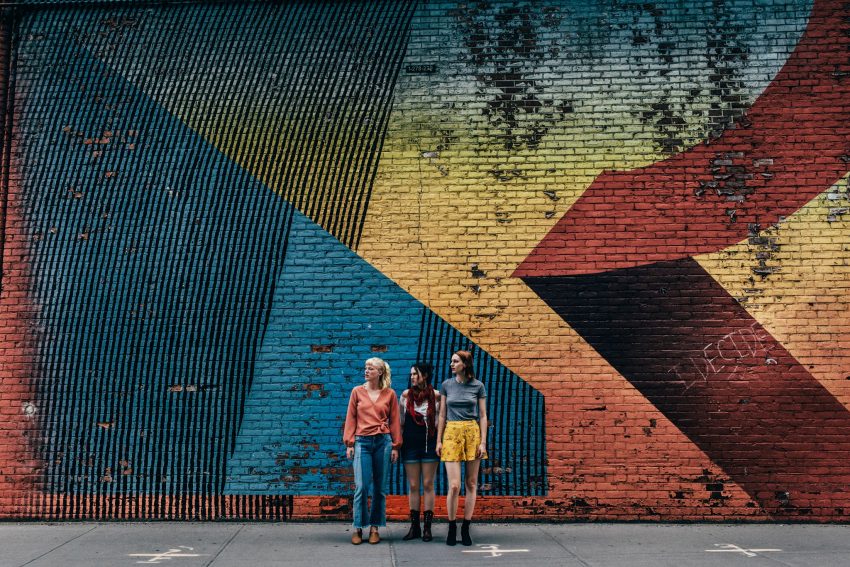 Often compared to artists like Sylvan Esso, Tune Yards, The Staves, and Dirty Projectors, ALMA are a dream-pop trio whose quirky music is immersive, full of stunning harmonies and infused with a DIY-spirit.

The trio have collaborated with Elliot Moss to release their first album, Mosaic, as a series of singles over the course of the next year.

Their latest release is ‘Water Rises’ – a party song about climate catastrophe. The track is both playful and serious as the rhythms make you move while the lyrics make you think.

Listen out for glitchy samples of Greta Thunberg’s speech at the United Nations (2019), mason jar coin shakers, the paper recycling they taped behind the hammers of their piano, and the straw “mutes” they wove into the guitar.

It was wonderful to speak to the trio about the inspiration behind their latest single, what we can expect from their debut album and who they would most like to collaborate with…

How did you all meet and when did you decide that you wanted to make music together?
We all met through the magic that is New York City. Lillie and Alba met in graduate school for Film Scoring at NYU and Melissa met Lillie while stumbling into a “can you just sing on this song?” for a friend.

In the winter of 2018, ALMA started to take its form. Lillie loves to host cheese parties. Everyone brings a cheese to share (or two or three), and all three ladies found themselves eating camembert and drinking wine while meowing in harmony.

Months later, we floated the idea of starting a synth pop band (fun fact: its OG name was “Wow-Pow”). Soon after, ALMA was born. Cheese and wine has been a must at our rehearsals ever since!

Which artists have inspired you the most since forming as a band and why?
Sylvan Esso, Mountain Man, Tune Yards, Dirty Projectors because we are quirky harmony nerds. There’s an unbridled wild weirdness to Tune Yards and Dirty Projectors that really resonates with us. And the same is true of Sylvan Esso and Mountain Man (which of course, Amelia Meath is ALSO in) but in glorious harmony.

How would you describe the style of the music you create to somebody who has never heard it before?
If Dirty Projectors, Sylvan Esso and Tune Yards had a gorgeous three-headed baby that sings in harmony alla Staves… well, that’s ALMA.

But, jokes aside…The three part harmony is definitely the centrepiece of our sound while the rest of our arrangements are heavily influenced by our backgrounds as film composers and audio engineers.

Overall, we think ALMA comes off as having a bit of a homegrown, DIY quality to it bathed in some ethereal three-part harmony.

How has your creative process developed since you first formed as a band?
Oh wow. Well it has developed into a primarily remote operation thanks to the pandemic. But we like to think that instead of holding us back, that has actually forced us to get more creative about the ways we record and use sound in our songs.

We have not been able to record in a studio since October of 2019, so we think that has had a positively formative effect on us. As a band, we started out not knowing much about producing, and with the help of our brilliant friends, we’ve all grown a ton as producers in this time. You know what they say about creative constraints!

Can you tell us about the meaning behind your new single ‘Water Rises’?
‘Water Rises’ is about the effects of climate change illustrated by the approach and destruction of a storm like hurricane Sandy, which ravaged our home city, New York, in October of 2012. But we wrote it like a kids song adults could party to.

Most readers will probably remember the popular lullaby, ‘Hush Little Baby’. The first lines go, “Hush little baby don’t say a word, mama’s gonna buy you a mockingbird. And if that mockingbird don’t sing, mama’s gonna buy you a diamond ring… etc”. Sorry, what? Mama’s buying you a diamond because you have yourself a mute bird? Somehow we thought this kind of logic was a perfect analogy for the government’s response to climate change.

So, I suppose you could say that a trio of full grown adults wrote a song about climate catastrophe inspired by a ludicrous lullaby.

What drew you to write about this subject?
Like all great things, the inspiration for ‘Water Rises’ was random. Lillie was driving on a dirt road in Central America, and caught a glimpse of a tree with a slip of neon pink plastic tied to it like a blossom, and almost unconsciously she thought, “Oh, so that’s what we’ll do when climate change eradicates seasons. We’ll make plastic flowers for the trees.” Eerie.

But how far fetched are plastic flowers for the trees when people are actively proposing mechanical bees to pollinate crops? She brought the idea to the group and what we uncovered was this collective outrage at the illogical ways the government seems to be attempting to mitigate complex ecological problems like climate change and pollution. It seemed like a good time to spotlight the absurdity with humour through music.

Because despite all that doom, ‘Water Rises’ is actually meant to be light – to poke fun at ourselves for our attachment to creature comforts and holding onto habits of the world we were born into rather than the one our children will inherit.

What can people expect from your debut album which will be released very soon?
Our debut album, Mosaic is a patchwork of personal memories, collective moments, and the experience of living in New York City. Each song delivers the story of a moment in time in our beloved city.

Mosaic invites you to sit beside us on the subway, walk with us through Astoria Park, and ride the Wonder Wheel at night as you feel into what it means to be a New Yorker.

It’s our hope that we’ll reach people through the immersive nature of our tracks and tap the collective human experience that music is able to access so well, all the while giving folks another way to connect to their own city.

Who would you most like to collaborate with and why?
Well, we are already collaborating with a god amongst men, Elliot Moss so it’s hard to imagine greener grass with any other collaborator. Elliot is a fantastic artist. We call him our “fairy godmother” because he makes everything we do sound so amazing. So far we have been working with him mainly in a mixing capacity, but many of his production ideas (and even guitar playing!) has made it into our songs.

But if we HAD to collaborate with someone else, it would be a dream to work with Justin Vernon (Bon Iver), The Staves, or the ladies of Mountain Man.

Who’s your go-to band or artist when you can’t decide on something to listen to?
We all love The Dirty Projectors a ton and often find ourselves reaching for their music as a go-to. And, anything Justin Veron cuts real deep. We saw Big Red Machine together at Pioneer Works, and maybe we can say this now that weed is legalised in NYC, but we all got high and had truly the most epic time. That same night, we got to hear a sneak peak of the (then soon to be released) Bon Iver album “i,i” in an airstream. Classic NYC.

What can we expect from you within the next 12 months? Any releases planned? Future gigs?
We are exactly halfway through releasing our album single-by-single, with the full album coming out in September 2021. So, yes, that means you can find a brand new ALMA single every month from here until fall.

But after we release the full record we already have some exciting new things on the horizon, including a new holiday album, finally gigging with our Mosaic (cross fingers!), and possibly even the debut of a new ALMA synth-pop Opera for 2022 based on Mosaic. We’ll let you know how that develops.