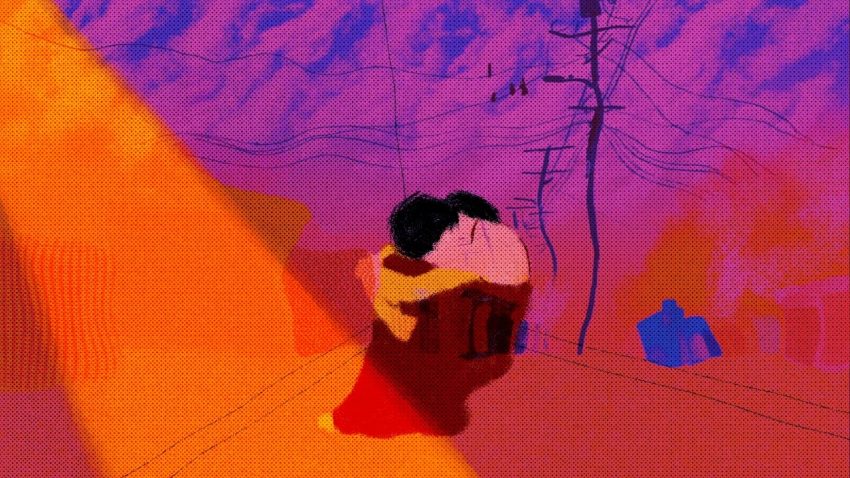 After releasing four singles and having received notable attention from the likes of Will Gompertz from BBC, Roberto Menescal and Amazing Radio, Muca & La Marquise have unveiled their latest track ‘Cheap Red Wine’.

The song was written and produced by Muca while La Marquise provides the vocals to bring Muca’s musical vision to life. The track also features Jonathon Holder on keys, Yaron Stavi on bass, George Vallack on drums, Corinna Hentschel on violins and violas.

‘Cheap Red Wine’ is a thoughtful, fragile and mellow ballad. The jazz-infused soundscape is simple and reflective. The production gradually builds as it incorporates layers of strings and electric guitars conveying a sense of growing inebriation and emotional heaviness.

The music is accompanied by a beautiful video animation by American animator Kelly Emrich, who beautifully captured a women’s moment of melancholy and introspection.

“When I first started storyboarding and deciding on colour palettes for the video, I knew that I wanted to convey the aching loneliness, anger, and resignation that the song evokes,” says Kelly.

How did you learn to write/to play/to sing?
I learnt to play the guitar by the age of 12 years old. I guess back then guitar was the most desirable instrument to play. Although, I always wanted to learn drums beforehand but I guess parents just think, “Let me just put my kid to learn another instrument rather than drums, as it would be a nightmare for me and the neighbours!”.

In terms of song-writing, I think it’s something that comes with you. You’ve got to have that thing inside you that makes you bring your ideas and emotions into the musical language.

Which artists have had the biggest impact on your music?
It really depends. As a kid, Hendrix, Stevie Ray Vaughan, Rolling Stones, some of the Bossa Nova style as I’m from Brazil. I think it’s interesting, as although some of the music inspires me today, it wasn’t something I’d buy or listen to on CD’s (yes I’m old!) like Portishead, Chris Isaak, some movie scores as Mario Puzzo’s The Godfather and the list goes on.

How would you describe the style of the music you create to somebody who has never heard it before?
This project is very particular, as it has a mix of indie, pop, jazz and bossa. One track is a proper bossa nova one, the other one is acoustic jazz, the other one like ‘Cheap Red Wine’ is an indie ballad. I also have several other music projects as The Beatflux (Heavy Rock) The LABRIT project (World) and Alice SK (Indie Folk).

What is the inspiration behind your track ‘Cheap Red Wine’?
This one started out with an acoustic guitar chord progression. I really loved that and I started to develop the track from there. I then showed it to La Marquise and she came up with lyrics and some melodies.

We then met up a week later to work on the music structure and she then laid down a couple of guide vocals as a demo which in the end were the main takes! I then worked on the production and arrangements from a completely rough guide track and I am super happy about the end results.

What do you want people to take away from listening to your music?
I want them to just enjoy. They can close their eyes and the music will bring them to different moods and places.

Which moment in your career so far are you most proud of?
I’m super happy with this track, but the animation made by US-based Kelly Emmrich was really the icing on the cake. She absolutely nailed it on this video, the mood and the colours that the animation brought to the track.

My next release is definitely the highlight of my career though but I can only announce in May!

What artists do you love that most people haven’t heard of?
That’s a tricky one! There’s so much talent out there nowadays. Not sure if I can tell you who is the new music Van Gogh right now. I guess there’s so many people talented people out there.

I’m working with a new singer-songwriter Alice SK, and I think she will make it big. Her style is indie-folk. For lyrics, you should definitely check out L.A. Salami, who is this generation’s best lyric writer/poet out there.

What tracks always put you in a good mood?
Let’s Dance by David Bowie.

What can we expect from you within the next six months? Any releases planned? Future gigs?
It’s extremely exciting musically for me. I’m working on several projects and collaborations. As I said, I have this new singer-songwriter I’m working with. We’re releasing her debut track in May with a very special musician being featured on it.

Also, working in collabs with Randolph Matthews, Pancho Trackman, L.A Salami, Rafael Kalil, releasing the EP for my rock project The Beatflux and releasing the album for Muca & La Marquise. I also have a project called ‘Muca Presents’ where I’ll always introduce a different young singer, doing some soul/indie/pop/jazzy style. I’m already working on five new tracks for this and I’m pre-selecting some new singers to partner with.