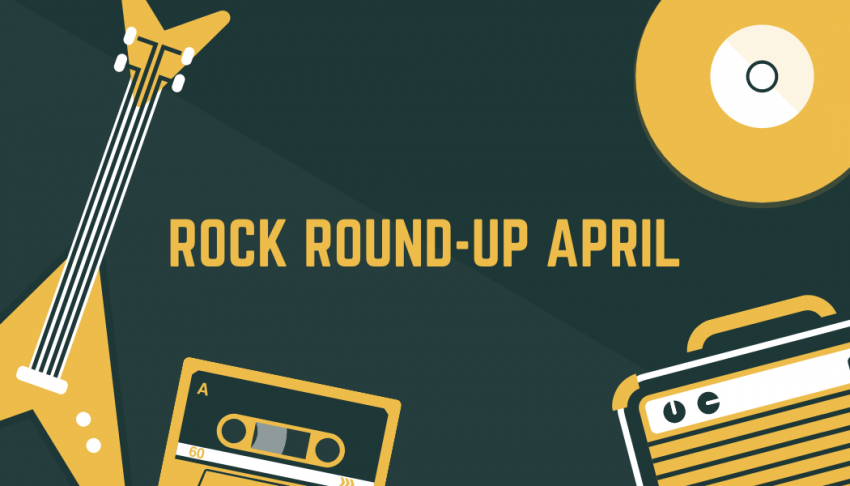 Here are the eight up and coming rock artists that we can’t stop listening to right now!

The track marks a new era for the band and establishes them as true rock n’ roll artists. Jordan White takes centre stage with her intense and memorable powerhouse vocals, Brian Dellis belts out his punchy guitar riffs and “Big B” is responsible for the hard-hitting bass.

“‘Trouble’ exemplifies the influence of other people’s perception of you that attracts trouble based on false assumptions of your own personal traits and past experiences,” says White.

“We wanted to write a song that embodied our live performance energy and rock ‘n’ roll vibe and to give listeners a record with our passion and excitement that we have in our show performances.”

Liverpool five-piece The Heavy North have just released their latest single ‘Darkness In Your Eyes’. It is the first single release from the band’s upcoming debut album which will be released late 2021.

The track was recorded and produced by Jose Ibanez at 3rd Planet Recording Studio, Liverpool and mastered by Martin Kuchta at Roughgrain Audio.

“’Darkness In Your Eyes’ is about recognising desperation in someone and trusting your instincts when you know someone isn’t being themselves, or something isn’t right and they’re trying to hide it,” says frontman Kenny Stuart.

“The lyrics touch on themes of loneliness and it’s about people craving intimacy and affection, often in the wrong places and from the wrong people”.

The track is full of gritty melodies, roaring guitars and superb harmonies. The band’s heavy-hitting sound is dynamic and exciting and we cannot wait for their full album to be released later this year.

Singer-songwriter and multi-instrumentalist Capitansam writes music that combines the styles and influences he grew up listening to. He fuses rock, pop, blues, soul, funk, disco and latin and draws inspiration from singer-songwriters such as Carole King, James Taylor, Billy Joel, Stevie Wonder and Sting.

He has shared the new high energy pop-rock track ‘27 Club’ which is the first track on his forthcoming album It Is What It Is.

The crisp drum groove pulses, bold brass and funky guitar riffs create a rich soundscape that perfectly complement Capitansam’s soulful and powerful vocals, creating a feel-good track that is guaranteed to put a smile on your face and get you moving!

‘27 Club’ explores the glamour and tragedy of the 27 Club and is a reminder to not get drawn in by the glamorised Hollywood imagery of rock ‘n’ roll and to remember the incredible talent of artists who died young often as a result of drug and alcohol abuse.

The title of the track is a reference to the age at which a number of iconic and ground-breaking musicians passed away. The idea began when Jim Morrison, Janis Joplin, and Jimi Hendrix all died at the age of 27 within a few years of each other between 1969 and 1971

Capitansam’s lyrics cleverly detail members of the 27 Club and the final lines of the track are a reminder to remember the artists, from Jim Morrison to Amy Winehouse, who left this world too soon…

Manchester piano-indie rock four-piece Pacific have launched their second single of 2021 ‘Alibi’ which marks the second of six upcoming singles that the band are planning to release over the course of this year.

Recorded by Kaiser Chiefs producer David Watts, ‘Alibi’ is about the lengths you would go to protect those you hold closest to you and what you would be prepared to sacrifice in order to do so.

The track is a bold anthem, which draws you in immediately with an enticing piano intro, and then grows and builds in intensity through heavy basslines, driving guitars and punchy vocals. The explosive chorus is calling out to be played live and drives the track to powerful heights.

Pacific have received notable support since forming as a band from the likes of Apple Music, BBC Radio 1 and METRO, plus a Y Not Festival debut in 2019, after winning a national vote to play, and it seems they will only continue to grow and build their ever-expanding fanbase.

Naked Next Door formed in late 2016 and is made up of lead singer and guitarist Euan Emerton, lead guitarist Tommy Woodward, drummer Callum Petchey and bassist Corin Schencks.

Their latest single ‘Reset’ was recorded by producer and friend Jake Robbins, and co-produced by Corin and their numerous influences shine through from Stereophonics to Oasis and Catfish and the Bottlemen.

‘Reset’ came together in early 2020. It started out as an idea in an acoustic jam session and then quickly evolved as a song that Naked Next Door were excited about.

The track is about feeling bored with everyday life and wanting to break out of that repetitive cycle and “re-wire”. It was written during a time where the band’s reality was feeling heavier and heavier and there was an overwhelming feeling that something needed to change.

‘Reset’ is a brilliant track that perfectly conveys the frustration of the past year whilst giving us an outlet to sing and dance our cares away. The track’s epic instrumentation and rich vocals, combined with the band’s cool confidence, are an infectious combination and worthy of widespread recognition.

The track’s dark undertones and pulsating synths exude a sense of foreboding and urgency. Combined with the catchy melodies and provoking lyrics, the band have created a memorable track that conveys their enigmatic spirit and gets you thinking.

Over the last year, the band have recorded a full album, both in the studio where possible and remotely. The self-produced recordings were mixed by Jag Jago (The Maccabees, Jessie Ware and Florence and The Machine) and the finished result is due to be released this summer.

Throughout 2020, the Illinois-based rock duo Ashland began writing new songs and reconnected with their musical and lyrical roots, channeling all of the aggression and frustration from the past year into their music.

They have now shared with us their EP I which marks a new chapter for the band and is their first independent release since 2015.

“We got a chance to step back and really think about who we are and what we want as a band. A lot of negative things have happened over the last couple of years and these three songs helped us rise up through the ashes and become the best version of Ashland yet,”  says the band.

In addition to releasing their new EP, Ashland has also unveiled the official music video for ‘In Your Head’ – a fiery track full of pulsating guitar lines, driving percussion and powerful vocals.

“‘In Your Head’ was the first song written on the EP. We didn’t know it while we were writing but this was the song that kind of brought us back to our roots and solidified the direction of this EP,” says vocalist Asia Marie.

Pop-rock, Brighton-based band Tash have released their brand new single ‘Chase’ – an empowering rock anthem about fighting the demons within us and embracing the person we truly are, not who we think we should be.

The track is full of crunching guitars, anguished vocals and in-your-face percussion which creates a moody and intense soundscape whilst conveying a profound message.

Throughout the lyrics speak about searching for a new heart in the hope that it will give you the strength to break old habits and addictions. The ultimate message is that no matter how dark it may get, you will find a new heart “that’ll go far”.

“We aspire to lift you up, give you the energy that you need to bring you back to the real you, not the person you think you should be,” says the band.