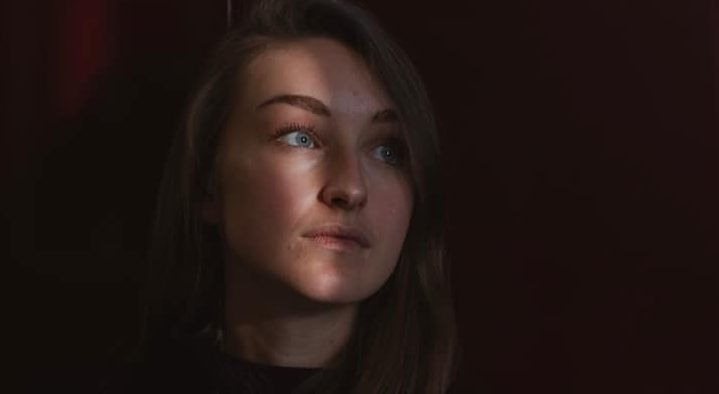 After years of honing her musical skills at venues including New York’s Mercury Lounge and SoHo House and LA’s Hotel Cafe, American singer-songwriter Paola Bennet is beginning 2021 by rolling out a number of new releases.

She has just shared her new folk-rock single ‘My Mother Says’ which is the second single from Bennet’s upcoming EP Maybe The Light.

The track explores the stifling stigma surrounding mental health and Paola reveals her own struggles with depression and the challenge of being truly vulnerable and open with the people we love.

“I want an inch of kindness, but I know that if I want to find it, I’ll have to bare my throat,” she confesses in the chorus.

Reminiscent of stripped-back songwriters like Margaret Glaspy and Madison Cunningham, the dreamy and gentle accompaniment allows the space for Bennet’s lyrics and emotive vocals to shine through.

Her lyrics are strikingly intimate and honest and she goes a step further to add a very personal touch by including audio samples from childhood home videos of Bennet and her mother.

There is also a sense of determination and hope that is expressed as the track rises and builds through the marked tempo and rhythm changes during the distorted choruses, challenging the traditional narrative around depression.

It was lovely to have the chance to speak to Paola about her latest release, the importance of collaboration and the artists she is loving right now…

Have you always been passionate about music? Was there a particular song or performance that made you think “Wow! That’s what I want to do!”?
It’s funny, I think a lot of people have that “aha!” moment, but I don’t remember having one. For me, music was just always an undercurrent in my life, and it got more prominent as time went on. I will say, live music always makes me feel that “Wow”—it’s medicine for me. I walk out of a show by an artist I love and immediately want to go home and write. Hoping live shows come back soon!

How did you learn to write/to play/to sing?
Singing has always been there: my grandma likes to tell a story about two-year-old me sitting in the backseat and breaking into a perfectly pitched Mary Poppins song. I never got formal training, but I was in choirs and musicals growing up. I started writing songs for fun around eight or nine (not masterpieces, but that’s fine), but I’d say I didn’t take it seriously until I picked up guitar around 14. I’d learn my favorites and then write songs influenced by them, whether in the lyrical themes, chords or picking patterns, etc. It’s the best way to learn, first imitating and then finding your own tastes and voice through that.

Can you tell us about the conversation that inspired your brand new single ‘My Mother Says’?
It was a conversation with my mother a few years ago. We were sitting at the kitchen table and I was trying to explain to her that I’d been in a depressive episode recently, and that in fact I’d had them for a few years. We’ve never been the “best friends” kind of mom and daughter — which neither of us wanted, we have a good relationship on our own terms! But it makes it harder to be vulnerable, especially as an adult, when you feel like you need to be independent.

She tried really hard in that conversation to support me as best as she could, telling me she’d had moments of deep sadness and isolation, that it was normal. And it broke my heart a little, both to know that — she’s quite cheerful, normally — and to have to explain that it wasn’t just moments for me, like the song says: “It’s the sky breaking over me, all the time.”

Why did you decide to include audio clips from old family videos in the track?
I knew early on I wanted to sample audio of a mother and child. Then I wanted them speaking in French, because my mother is French and raised me to speak it. That’s fairly niche, so I thought I should dig around and see if we had any home videos that would fit. Around December 2020, when my producer Adam Tilzer and I were recording the song, I had some tapes digitized, and they contained a few moments between my mom and I that felt perfect for the song.

At first you hear them in the quiet moments, and as the song builds to its climax, you hear them in the mix, as textures. The samples are there for all of us who feel a little nostalgic for the time as children when our emotions maybe weren’t so complicated, when the boundaries of our lives and our relationships with other people were more clear-cut.

On Instagram, you shared an early version of ‘My Mother Says’ that you performed live in 2018. How has the song developed and changed since then?
It’s so much bigger! The song was very sparse at the time, and it had more of a waltz feel, and I sang it very softly. Now it’s a big, raw thing, like an open wound, which feels right for the subject. My friend Justin Oppus lent the guitar walkups in the verses that I adapted, and my early bandmates John and Chris set the rhythm.

When Adam and I started on it, we wanted to make it strange, unnerving. The audio samples and guitar textures do that – one guitar part had him improvising parts until nearly 2am, when we hit the thing that felt right. Brian Delaney, on drums, perfectly set the change of tempo between verse and chorus and made that last build so big. Ben Wright, on bass, has these gorgeous little bits in the second verse, and then just lets it fly in the chorus. The song is a collaborative effort, and I’m grateful for that.

Does the audiences’ reaction to your songs play a part in deciding the songs you choose to release?
It does and doesn’t. I do think it’s important to listen to your audience, because they’re the ones listening to you. There’s something to be said for the songs that clearly resonate with people. If they want a certain song released so they can put it on repeat, that’s so humbling and valuable!

I think it’s equally important to release songs that feel like your best artistic work, regardless of public opinion. ‘My Mother Says’ may not be as catchy or radio-friendly, it’s got some weird audio elements, it moves between genres – but it’s honest, raw, experimental work that I’m really proud of.

You’ve said the best songs start sitting on the studio floor. What else contributes to creating the ‘best’ songs?
Follow-through. There are plenty of moments when a song feels like it’s not right, or will never become what you want, and those are the moments to step away, take a breath, and then come back to it, because you’ll have gained the space and perspective you need.

Treat it not as work, but play! That opens up a lot of new ideas. Also, having good collaborators who understand what you’re trying to do is crucial. In addition to Adam and the musicians I worked with, I had a small group of friends be my “listening committee”.

If you were a song, what would you be and why?
There are a hundred of these, but I’ll go with the most recent one that I really resonated with: Lennon Stella’s ‘Older Than I Am‘. As the eldest sibling, who’s always been cautious and shy and responsible and independent, it really struck a nerve. I love how Lennon practically howls on the last couplet of the song, it’s really cathartic.

If we were to look at the artists you are listening to, who would be on your playlist?
My core group of really great songwriters I listen to constantly — Laura Marling, Noah Gundersen, the members of boygenius (Phoebe Bridgers, Julien Baker, Lucy Dacus), Anais Mitchell, Joni Mitchell, and Sara Bareilles. More recently, I’ve been listening to Jensen McRae, Pom Pom Squad, Anjimile, and Orla Gartland. I usually end up in a triangle of folk, alternative/rock, and pop.

What can we expect from you within the next six months? Any releases planned? Future gigs?
I’m actually really excited to share that ‘My Mother Says’ is the second single off my upcoming EP, Maybe The Light, produced by Adam Tilzer and out on May 21st. It’s my first original EP in five years, so I’m thrilled and impatient. I think the collection of songs is really varied and showcases my different influences and strengths as a songwriter and musician. I’m hoping to have a virtual release show, and maybe – depending on the world – some real-life shows in the fall! Keep an eye out!