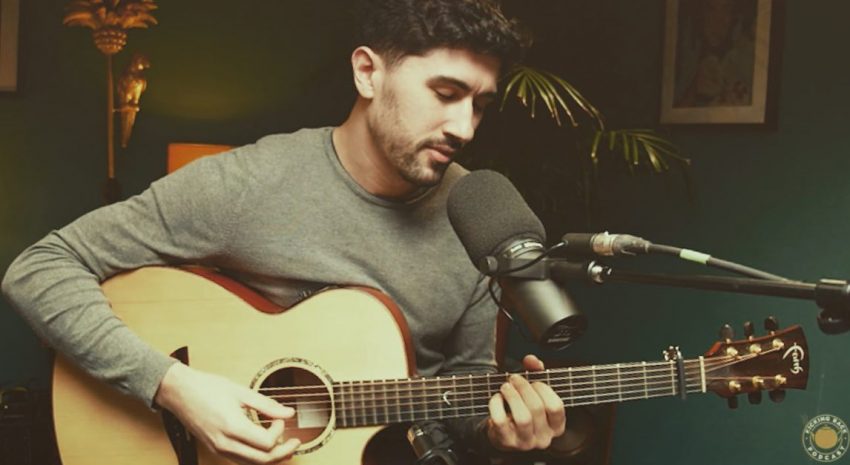 Danny Addison is a singer-songwriter and multi-instrumentalist from Manchester who writes alternative folk music. He has just released ‘Lady’, the second single to be released from his upcoming four-track EP which has been produced, mixed and mastered by his brother and collaborator, Tom Addison.

The track draws on the wealth of experience that Danny has garnered over the years through performing and collaborating with skilled songwriters and musicians such as Chloe Foy, Sophie Morgan and Roy Kerr.

Danny describes the track as “an emotive account of the transcendence from chaos to calm”. It oozes nostalgia and the warmth and tenderness of Danny’s vocals are soothing and bewitching.

The lyrics describe the challenges we can face throughout our lives and how through humility and devotion we can ease our pains, “Maybe we’ll wonder, through rose thorns and thunder/You’ll guide my beating heart, till the end”.

The interplay between the intricate nylon-string guitar pickings and emotive violins perfectly complement the ebb and flow of Danny’s delicate vocals which move seamlessly between full voice and falsetto.

The dreamy arrangement and rich instrumentation of this alt-folk love song envelops you in its tender magic and transports you to a place of peace and stillness.

Danny is an artist that we will be keeping a very close eye on throughout 2021 so it was an absolute pleasure to chat to Danny about his brand new single, his upcoming EP and the artist he would most like to serenade him…

When did you first start getting involved with music —and what or who were your early passions and influences?
Me and my brothers started playing the violin when we were about 4 or 5. I guess my earliest influence would have been my brother, Luke. I would play with my toy cars while he would practice and it meant that when I came to learn the same tunes I would know the melodies already. That helped a lot at the beginning – my teachers just thought I just picked stuff up really quickly (I never told them my secret).

You have just released your single ‘Lady’. Can you tell us about the story behind the track?
It’s about someone guiding you through a tough time but also being there for that person too and having a weight lifted from your shoulders.

Your EP will also be coming out next month. How are you feeling about that?
Excited and nervous! It’s been a long time coming and I’ve never put so much work into something. I’ve had the most amazing help from my brother, Tom, who produced, mixed and mastered the whole thing. I can’t wait for it to be out in the world.

What has the process of making the EP been like? Any challenges? Favourite parts?
It’s basically been the thing that’s kept me sane in lockdown. I think a lot of musicians lost their sense of purpose in lockdown because live performing is such a huge part of what we do. Being able to put time into something for the future has been a bit of a lifeline.

The response to the first single from the EP, ‘Tribe‘, has been overwhelming and has made all the tough times leading up to release worth it. One of the biggest challenges has been not being able to be in the room with people I’m working with! I went down to London at one point where Tom lives and we worked on a mix through the window with a very long cable extender so we could stay socially distanced. Good times.

What do you want people to take away from listening to your music?
I guess I’d like people to feel that they can speak their minds and be themselves. I think it’s so important to feel that.

You are currently set to perform at Manchester Folk Festival and FOCUS Wales later this year. What do you love most about performing live?
The idea that people who have never met you can be moved by something you do. I especially love that when playing for audiences abroad. It’s amazing to experience the music you make transcending cultural and language barriers.

Do you have a standout show or festival that you’ve played?
I think the Royal Albert Hall was probably the most nerve-racking. My favourite ever was a Sofar Sounds gig in Cologne, Germany. It was with my old band and people were crying at the end when they came up to us. Like what I was saying about culture and language differences – music can overcome all that so it just doesn’t matter. I’ll never forget that gig.

If you could pick one musician to serenade you, who would you choose and what song would they sing?
Sam Cooke – A Change Is Gonna Come. Ideally with a full orchestra backing him up. I’d be there with my toffee popcorn.

What are your musical plans for the next 12 months?
Working on a ten song album which will hopefully be released in Summer 2021. Festivals coming up as well – fingers crossed we can play! Hugging ALL of my friends (whether they like it or not).