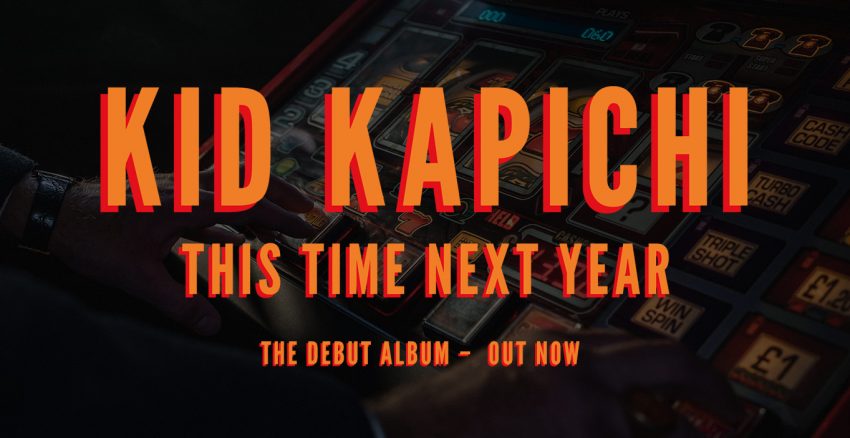 Kid Kapichi’s debut album ‘This Time Next Year’ is a relentless and thrilling listen which is rooted in a DIY spirit.

The Hastings post-punk four-piece Kid Kapichi stormed the UK rock scene back in 2018 after the release of their single ‘Puppet Strings’ and EP ‘Lucozade Dreams’.

The excitement surrounding the band continued to grow from there and they built a name for themselves through their exhilarating and punchy live shows. They have shared the stage with the likes of Frank Carter and The Rattlesnakes, Fidlar and Slaves as well as playing sets at some renowned festivals like Reading and Leeds and Neighbourhood.

In 2020, when life as we know it was put on pause due to the pandemic, Kid Kapichi decided to produce and release their eagerly anticipated debut album independently, with co-vocalist and guitarist Ben Beetham taking on the engineering and mixing responsibilities.

“Obviously we had two choices with the pandemic – wait it out, or find a way to do it ourselves,” says Ben.

The resulting album ‘This Time Next Year’ is intense, gritty and bold. A biting exploration of growing up in poverty with lyrical themes that capture intense feelings of anger and frustration.

Opening track ‘First World Goblins’ bursts ferociously into life with buzzing guitar riffs and a roaring bassline. The track establishes from the outset what Kid Kapichi are all about – explosive riffs, a booming rhythm section and infectious energy.

One of the album highlights is the frenetic track ‘Working Man’s Town’, an anthem about the struggles of the working class, “They kick you when you’re down in a working man’s town”.

The gristly vocals, thunderous guitars and big choruses are perfectly paired with the tongue-in-cheek but cutting lyricism, “she sells seashells by the seashore until they took her f*****g house and now she don’t no more”.

This mood of defiance continues throughout the entire album. The hard-hitting ‘Sardines’ deals with everyday rage, “Work all day at a shit 9-5, boss don’t care if you live or you die… you’re angry, and that’s alright” while ‘Self Saboteur’, a punchy track, tackles the frustrations of growing up in a small town.

On stage is really where Kid Kapichi come alive and ‘Violence’ is crying out to be played in front of a live audience. The focus of this anthem of pure frustration is police brutality and its blistering guitar solo will drive crowds wild.

‘Thugs’ is another track that will be a surefire live hit. It deals with the division between social classes in modern society and received a nomination for ‘Best Rock Video Newcomer’ at the UK Music Video Awards. Over the stormy punk mayhem, the feisty lyrics explain “You blame our problems on the poor… you wanna bark, we’re going to bite back”.

Another high point arrives in the second half of the album with the indie-tinged alt-rock track ‘Fomo Sapiens’ about not knowing when to call it quits. It is bursting with a catchy chorus, playful melodies and a range of eclectic sounds including the gentle chiming of a xylophone and synths.

‘What Would Your Mother Say’ is another raucous offering whose in-your-face riffs and ferocious vocals are crying out for crowd interaction. It is a cautionary tale “about the bad decisions made by a small town trouble maker. You’re invincible until you’re not​”, explains Ben.

Penultimate track ‘Don’t Kiss Me (I’m Infected)’ is a witty track which alludes to Covid-19 and deals with keeping your distance from those who come too close to you. It is a stomping and catchy number that features eerie synths and bells and a distorted riff throughout.

Closing track ‘Hope’s A Never Ending Funeral’ is the slowest and most introspective song on the album. It is a piano-led ballad which tells the story of a broken heart. The more experimental sound reveals a different side of the band which is enchanting and distinctive.

It is a beautiful and thought-provoking way to close the album and opens up new avenues for the band to explore further on future records.

Despite a few instances of repetitive soundscapes and an overall lack of experimentation, Kid Kapichi have created a confident record that they should be proud of.

The band are unrelenting in their delivery of energetic rockers brimming with humorous and insightful lyrics, catchy choruses and gravelly vocals. The album is packed with grit, attitude and crunch and allows Kid Kapichi’s irreverence and artistry to shine brightly.

The heavy basslines, gritty guitar riffs and energetic beats throughout will leave you dreaming of packed out venues, roaring music and mosh pits. Hopefully, we won’t have to wait too long before we can see Kid Kapichi play these songs live.