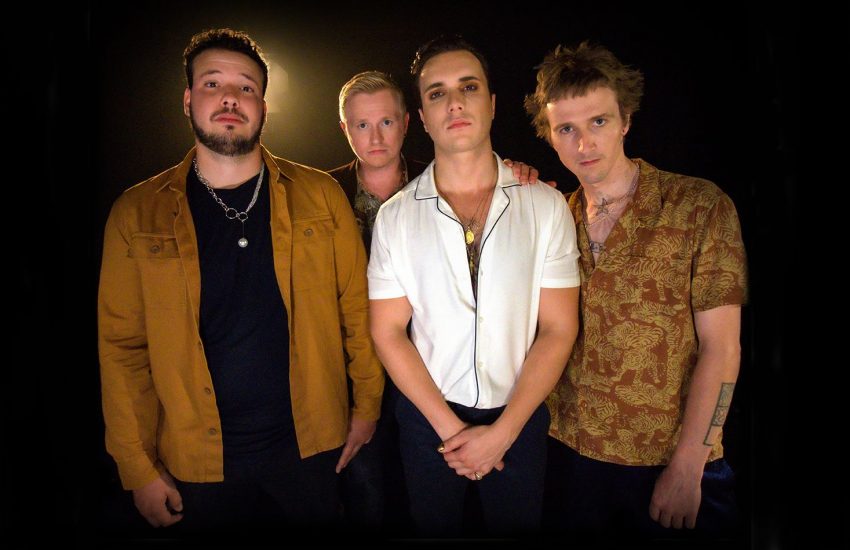 Interview with The Great Leslie

“Accept who you are for better or for worse, and hopefully love will follow.“

Exuberant vocals, glorious basslines and guitar hooks and relatable lyrics are just some of the characteristics you can expect from the music by The Great Leslie, the London based alt-rock band.

Their single ‘Out of My Hands’ is a beautifully crafted song which had me gripped within seconds. Its catchy guitar hook, bold and bright vocals and captivating lyrics are a joyous combination. The Great Leslie have been performing live since early 2019, and this song is crying out to be performed to a huge crowd, all singing and dancing along!

How did you all meet and when did you decide to start creating music together?
I think it’s best to describe our formation as an evolution, considering that this band was originally the Ollie Trevers (lead singer) band, and that there have been a few changes in personnel.

I met Guillermo (guitarist) at ICMP when we were doing a masters in song writing. We later found Ryan (drummer) through social media, and then just before we transitioned to becoming The Great Leslie, we found Jason (bassist).

What is the meaning behind your band name?
There is no discernibly deeper meaning behind the name, but the name itself does have meaning to my brother (our manager) and I, as it’s one of the lead characters from our favourite film, The Great Race. It was the best out of a long list of names we were considering, so that’s what we went with!

How would you describe your style of music to someone who has never heard it and what is unique about your music?
I think style wise we are in the realm of alternative/indie rock and pop. We take influence from a lot of dance music and old 70’s and 80’s rock. However, we don’t like to have any boundaries with how we should sound as we take influence from many different artists belonging to a wide range of genres and styles.

I think we have a very unique sonic identity, so it’s hard to succinctly describe our style. I suppose you just have to listen and decide for yourself. I think our uniqueness is a product of our sound as a group, certainly things such as our vocals are different to most other acts, but it is our complete sound that makes us original.

Which artists inspire your sound and what is it about them that you love?
A lot of older artists such as David Bowie, Pink Floyd, Queen, The Clash and many more have inspired us. I think it’s because they had such individual sounds which they gained through experimenting with many different genres and ideas, which is exactly what we try to do. We also listen to many modern bands such as, The Killers, Franz Ferdinand, Foals, Muse etc. All of whom also have very individual sounds. That’s what we love about them, they have a clear sonic identity that is unmistakeable.

What inspired to write your latest track ‘Out of My Hands’? What is your favourite lyric from the track and why?
The inspiration behind ‘Out of My Hands’ was the need to be unequivocally honest about myself. I am honest in all of my songs, but often my lyrics are shrouded in metaphor, symbolism and unspecific narratives, whereas ‘Out of my Hands’ is very much to the point and matter of fact. It’s essentially a confession of all of my own faults.

I’d have to say that “I don’t think I should hate myself, I just think I need a little help”, is probably my favourite lyric, as it encompasses the whole ethos of the song, and is an idea that I believe rings true with everyone.

What advice would you give to somebody who is struggling with self-love?
I don’t know if I’m qualified to be advising anyone in such a manner…though, I would say to them that in all honesty, I’ve never been someone who has ever truly been able to exercise ‘self-love’. Mainly, because I’ve never needed to as I’ve been blessed with an incredibly loving family and amazing friends. ‘Out of My Hands’ was exactly about me not being in that position mentally or emotionally.

However, I think the best place to start is self-acceptance, which is what this song is all about; how can you love anyone without wholly accepting who they are, surely this is even more true when talking about oneself, as it is only ourselves that we have to live with every day. Accept who you are for better or for worse, and hopefully love will follow.

How has lockdown had an impact on your music and creativity?
Lockdown impacted our music and creativity by pushing us to write more, as it was the only way in which we could progress as a group. I certainly feel like I’ve written more this year than I have in many years, purely because of the amount of time that we’ve not been able to do anything else, i.e. touring and gigging.

Do you have a dream venue or festival that you would love to play at? Why?
Glastonbury. I’m pretty certain it’s the biggest festival, if not one of the biggest festivals in the world. All our idols have performed there and now it’s our turn. We want the main stage, we want to bring the house down, to spread love and cheer, to make memories and put the best show on in front of hundreds of thousands of people.

What is one artist that you think everyone should have to listen to? Why?
That’s a difficult question to answer as I doubt everyone wants to get the same thing out of art/music, but if I were to impose my ideals of love, beauty, and romanticism upon everyone, I would say Ella Fitzgerald. I think she has the most beautiful voice I’ve ever heard in my life and I find nothing more relaxing and beautiful as old school jazz.

What are your musical plans for the next 12 months or so?
So, in December we re-released our single ‘I Know You Know’, then we’re releasing a live session of us playing an EP we released before we became The Great Leslie called ‘Saucy Naughty Rubbish’.

In 2021 we will be releasing a further six singles with music videos throughout the year and are set to play at a number of festivals. Hopefully, we will tour but this is contingent on the pandemic situation.