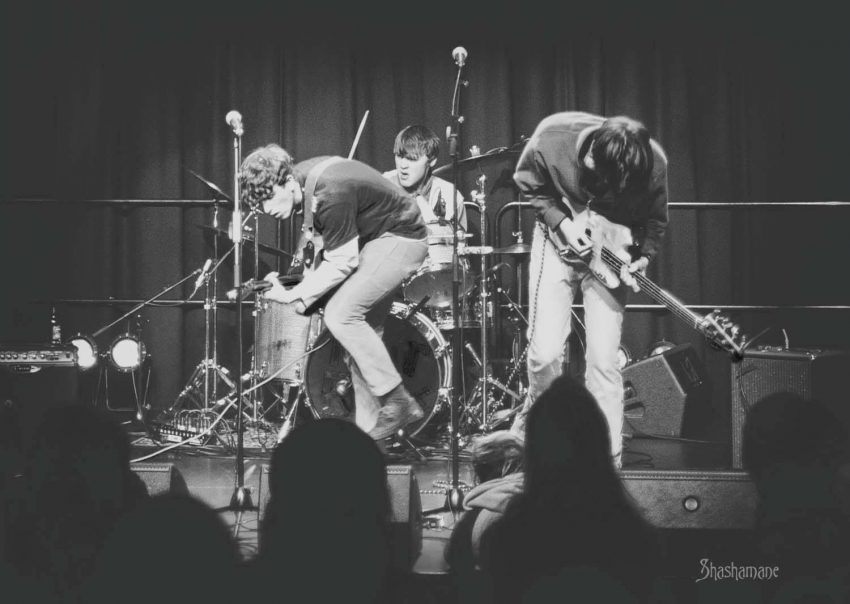 “We all love listening to, making and performing music and to form our own band was something we always wanted to do.“

Front Bangs, the indie-rock three piece from Norwich, are dynamic, energetic and quickly building a name for themselves. Their latest track ‘Fake Crowd Noise’ is both catchy and punchy and includes a captivating and funky tempo change midway through that will make you want to press repeat again and again!

It was a lot of fun to chat to the band this week about their lockdown experience, their latest track and the artists that they think we should all be listening to…

How did you all meet and when did you decide to start creating music? What inspired your decision?
We all met when we were in the early years of high school with our oversized blazers and over encumbered backpacks. Alex and I (Rich) were involved in the school bands and got to know each other through that, and I got to know Brad through mutual friends. Alex already knew Brad from primary school and those two would often jam with each other outside of school, learning covers etc.

Later in high school, we started to play together more for school shows and the like, but the band as it is known now didn’t officially form until about 2/3 years ago once we’d left school. I jokingly said I’d learn the bass to join Alex and Brad’s new project and that joke became the reality it is today. We all love listening to, making and performing music and to form our own band was something we always wanted to do. The band name came from a disagreement about the name of a type of haircut and then it just stuck.

How would you describe your style of music to someone who has never heard it and what is unique about your music?
We never know how to describe our music or what genre it is but in the broad sense it definitely comes under rock. However, there’s definitely themes of funk (we all love the funk), grunge and indie/alternative. We don’t try and base ourselves on a single band or a genre but like to dip into different genres and sometimes we like to get technical (mostly our drummer as he’s a classically trained music graduate).

We all have quite varied music tastes. There’s a good amount of overlap but there’s also a lot that we don’t share a passion for but when we come together to make a song or whatever then there’s a fusion of all those tastes and flavours in our music which we feel gives us an edge.

What inspired your latest single ‘Fake Crowd Noise’? What do you love most about it?
From a lyrical point of view, they came out when I was having a really bad patch of anxiety and it’s kind of someone looking at themselves and telling them to try and take control of their head again. We love how the track evolves from different sections from its airy and groovy beginning, to the slowed down middle, to the big energy heavy section at the end. The song is a bit of a journey of different feelings, if that doesn’t sound too pretentious. (Brad)

How has the lockdown had an impact on your music and creativity?
We had the plan of using the first lockdown as a time to make new music, but I think without being out and about we just lost inspiration and with no gigs in sight we lost a bit of drive. We love writing new songs but performing them is the ultimate goal so without any gigs on the horizons I guess we just lacked a bit of creative drive.

However, we did use the time to record a couple of our songs. It’s great that bands have been able to record themselves playing live and putting on virtual shows but unfortunately, we just haven’t been able to do that ourselves as Alex is up in Manchester studying and was obviously stuck there over lockdown. So yeah, we’ve been quite lazy with the band over lockdown but with the hope that the new vaccine will allow us to play gigs again next year. We’re ready to get up on the stage again!

Of all the songs that you have ever created, which are you the most proud of and why?
Probably this one to be honest. It just felt right when we were making it and it’s the most we’ve worked on a song in the studio. Lyrically, we’re really proud of it too and it’s just one that we love to play live as it just feels really good. It also felt great to record it after not being able to play together for so long.

Tell me about your favourite performance venues?
We’ve been lucky enough to play most of the main venues in Norwich except for the LCR! That’s a place we would absolutely love to play at. Space Studios is a sweet little spot. It’s one of those venues where the band are basically in the crowd which is great for the atmosphere. We’ve only played there once but we loved every second of it. Being on the same floor as the crowd in a fairly small space with a good crowd never gets old.

Epic Studios is up there for us too, the sound in that place is wicked and we’ve had some great times there. And of course, the Waterfront Studio is definitely one to mention. We’ve played there a few times and it’s a special place for us as we held our first proper headline show there and we had a stage invasion happen there too which was jokes.

Which musician or band would you love to collaborate with and why?
Probably Damon Albarn as he’s collaborating with everyone these days!

What artists do you love that most people haven’t heard of?
There are a lot of local bands that we’ve seen play and bands that we’ve played gigs with that we really like such as Menglemoes, Bag of Cans, Wreck, Pin Ups, Sleemo, Suds, Lazyboy, Bridget Holmes, Mummy, Ladybird and Feet to name a few.

What can we expect from you within the next 12 months? Any releases planned? Future gigs?
We’ve got another track to release that we recorded at the same time as this one which will be out in about a month hopefully. We hope to maybe record again in the next 12 months. We might even try some home recording over lockdown. No gigs booked yet but we’re really hoping to get something in our diary in the new year.