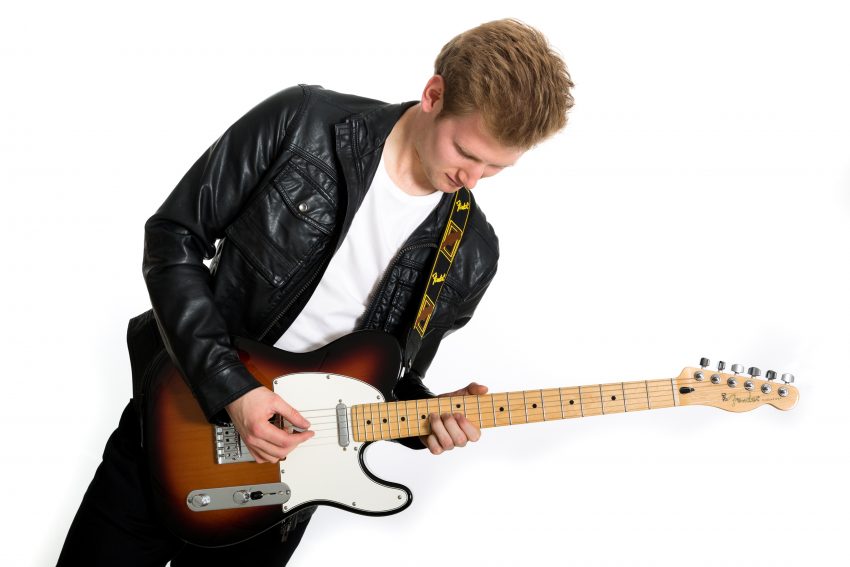 “The process of making music from start to finish is a joy like no other – creating an idea and growing it until it’s ready to share with the world.”

Jamie Felton, an artist from Oxfordshire, has recently released a new single and EP, both named ‘Addicted To The Music’. The six-track portfolio consists of a diverse range of genres – rock, pop, funk, latino, country/comedy and Spanish guitar – and showcases Felton’s talents and his infectious love of live music.

The track ‘Addicted To The Music’ is a joyful and energetic rock track about the feeling of exhilaration that you experience when watching a live gig at a packed-out stadium. It features punchy guitar riffs, pounding percussion and stadium-echoing vocals in order to recreate the soundscape of a live music venue.

Felton wrote the track to remind us how much we all cherish live music and has pledged to donate 1p for every Spotify/Youtube stream to the Music Venue Trust, a charity supporting music venues in the UK.

How did you first get into music and what inspired you to start producing your own music?
I remember first wanting to take up the guitar in 2006 after a weekend in Plymouth visiting my cousin, Christy, who plays. He was bashing out all of my favourite songs at the time so Busted, Green Day and Oasis and I couldn’t help but be inspired! And then at 11, I started throwing together some chords and putting (some rather dodgy) lyrics to them and gradually learnt the craft of song-writing.

Who are your main musical influences? Why do they inspire you?
The Beatles are number one for their sheer genius song-writing. Queen for their dramatic arrangements, exceptional harmonies and Freddie Mercury’s unrivalled ability to captivate an audience. Bryan Adams and Bon Jovi for the rockier side of things. And more recently, the sweet, sweet vocal cords of Michael Bublé, Bruno Mars and Paulo Nutini.

What is the inspiration behind your new EP ‘Addicted to the Music’?
I’m inspired by a wide variety of genres so I love trying to replicate them in my writing; so the EP showcases different styles like rock, folk-pop, funk, latino, country and fingerstyle guitar. The inspiration for the single, ‘Addicted To The Music’, was the unfortunate closure of the Oxford music venue, The Cellar, in March 2019. The song is an up-beat, feel-good rock track about the euphoria of watching a live band give the show of a lifetime and so is a celebration of live music, reminding people just how cherished it is.

Did you enjoy the process of making the EP? Any challenges? Favourite parts?
Very much! From writing to arranging to recording to production to promotion; the process of making music from start to finish is a joy like no other – creating an idea and growing it until it’s ready to share with the world. The main challenge for me was learning how to properly promote a musical product. My last EP in 2017 absolutely flopped so I spent most of lockdown watching YouTube videos about music business, learning little tips and tricks that can make the difference besides the obvious things like social media posts and word of mouth.

My favourite part was receiving the songs back from the producer I worked with, Mike Bannard from Safehouse Studios in Oxford. He did a magical job in bringing the EP’s sound to life. For example, my vision for the single, ‘Addicted To The Music’ was for it to sound like it was being performed at a live stadium concert and his exceptional knowledge for plug-ins and sound-shaping helped achieve that so I thank him a lot for his contribution to the project.

Can you tell us about the best gig that you’ve ever experienced?
I’d say seeing my childhood favourite band, Green Day, live at The NEC in Birmingham in 2009. That was a great show they put on; although that top spot might be overtaken next June as I’m seeing Queen and Adam Lambert at the O2 in London, an event that was due to happen this year but, well… let’s not go there… In terms of a gig of my own, supporting Daniel Wakeford at Oxford’s O2 Academy in 2018 was a pretty special one for me – Daniel’s a great guy and it was a pleasure to be part of his tour.

Why do you think it is so important for everyone to support the Music Venues Trust?
Because grassroots music venues are the place where artists and bands first begin their professional shows, where they grow an audience, prove their ability to a new set of music fans and hone their craft. Without these, we may not have the likes of Adele, Ed Sheeran and Arctic Monkeys. And it’s such a shame that many are closing up and down the country due to lockdown. So, I’ve pledged to donate a penny to the MVT for every stream of the EP’s single on Spotify and also for every view of the music video on Youtube, just to help out in any way I can.

What moment in your musical career so far are you the most proud of?
Probably just being in the lucky position to earn a full living from music. I teach guitar and drums throughout the week and then go out gigging at the weekend – it’s all good fun. To name one individual moment, I’d say the moment that I read that I had achieved a first class honours award in my music/songwriting degree – it took a monstrous amount of work and I was overwhelmed with joy to see that it had all paid off.

What piece of music do you wish you could erase from your mind so that you could experience it for the first time again and why?
This would have to be my favourite song of all time – “Innuendo” by Queen. Though I deliberately only listen to it just once a year, on my birthday, as a treat. I believe that when you enjoy something, the less you do it, the more you enjoy it and cherish it when you do do it and listening to your favourite music is exactly the same. I just think it’s perfect in every way – ingenious chordal choices, obscure melodic decisions, the power in the arrangement, a lyrical concept where Freddie questions the entire meaning of life as he records his highest ever note hit in chest voice whilst practically at death’s door – absolute definition of a masterpiece.

What artists do you love that most people haven’t heard of?
Scary Pockets are a band from LA that play funk covers – their arrangements and the way they twist songs is so innovative. Similarly, I’ve recently got into fingerstyle guitar and so a fantastically talented player would be Andrew Foy who has grown a Youtube channel dedicated to pop covers on the six-string twanger! Very inspirational for my cover of “Señorita” by Shawn Mendes & Camilla Cabello, which is the final track on the EP.

What are your musical plans for the next 12 months or so?
To start releasing singles. I’ve always stuck to EPs or albums but I’ve learnt that releasing singles on a consistent basis is the best way to keep your audience engaged with your portfolio. I’m currently arranging a classical orchestral piece which I’m aiming to release within the next three months.

I’m also writing a rap song about the music industry at the moment. I’m not sure when that’ll be out as it’s definitely the most challenging song I’ve ever written – the lyrical choices are very difficult and take time. I’m also trying my hand at grade 8 drums as a personal lockdown project so I’m aiming to take that exam within the next few weeks.