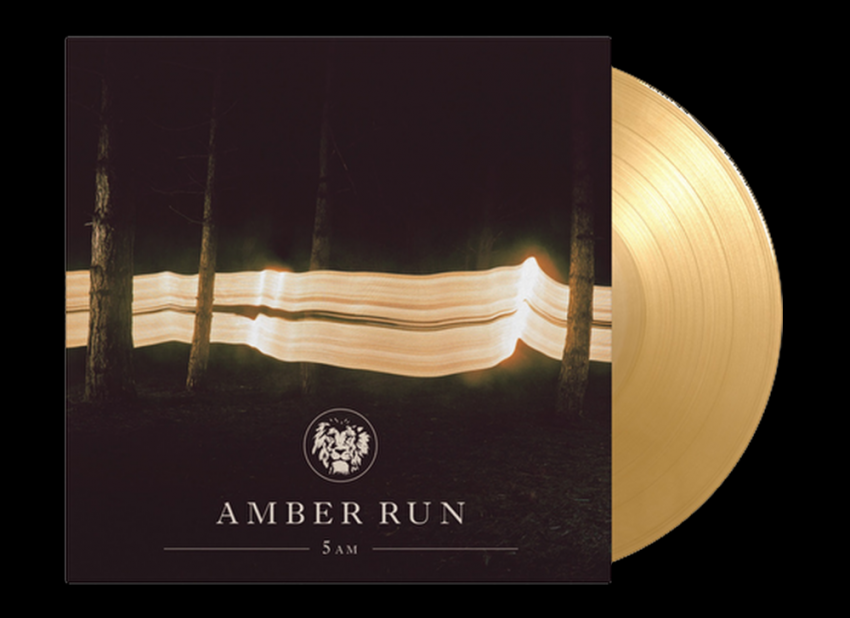 Review of 5am by Amber Run

In 2015, Amber Run released their debut album 5am. Now, five years on, with two more albums under their belt, the band have released a limited edition gold and amber swirl vinyl of their debut album to celebrate its success. The album was beautifully produced by Mike Crossey (an award-winning producer who has also worked with Foals, The Kooks and The 1975) and demonstrates the band’s ability to pull off both gentle ballads and euphoric anthems. If you have not heard of Amber Run, then you are about to discover something very special.

The opening track ‘I Found’ begins with intimate, stripped back harmonies. It is seemingly simplistic but this track holds your attention with its powerful lyrics, synth-pad ambiance, punctuating drumbeats and emotive vocals. I remember hearing this song played live for the first time and feeling overwhelmed by the beautiful melodies and its darker undertones, and I still feel taken aback by its eerie beauty every time I listen to it. It perfectly sets the scene for the poignant narratives ahead.

Next up is ‘Spark’, an electrifying number which is guaranteed to put a smile on your face. The pounding beat, punchy guitar riffs and passionate vocals are wonderful. When front man Joe Keogh sings out “Let the light in, let the light in” and the crashing drums kick in after each refrain, it feels like a burst of sunshine.

The energetic choruses and building chants that we hear in ‘Spark’ are also featured on other tracks such as ‘Hurricane’, ‘Just My Soul Responding’ and ‘Noah’. The whirling guitars, lively drumming and driving bass-lines are all key ingredients that have helped Amber Run to create a collection of memorable songs that are crying out to be performed in a packed out stadium.

Title track ‘5am’ comes later in the album and provides a contrast to the more energetic tracks. It is an intimate and sincere song. It slowly builds and as the mood becomes increasingly intense, Keogh’s ability to produce vocals which seem to bleed emotion really shines through. It is hauntingly beautiful and encapsulates the band’s incredible ability to slow everything down and transport you to a place of stillness and awe.

The penultimate song ‘Shiver’ is another track which highlights the band’s beautiful talent for translating everyday feelings into lyrics that are poetic and moving, the ability to take the ordinary and make it extraordinary. Keogh sings “It seems my love moved straight through you” while he is accompanied by softly plucked guitar strings and glistening cymbals.

Overall, 5am is a stunning album which paved the way for all the incredible music that has subsequently been released by Amber Run. It is a wonderful exhibition of the band’s capabilities. Each track is flooded with emotion and the band moves seamlessly along the spectrum of emotions from sadness to euphoria without compromising their sincerity and heart. If you haven’t heard this album before, make sure that it is the next thing you listen to!