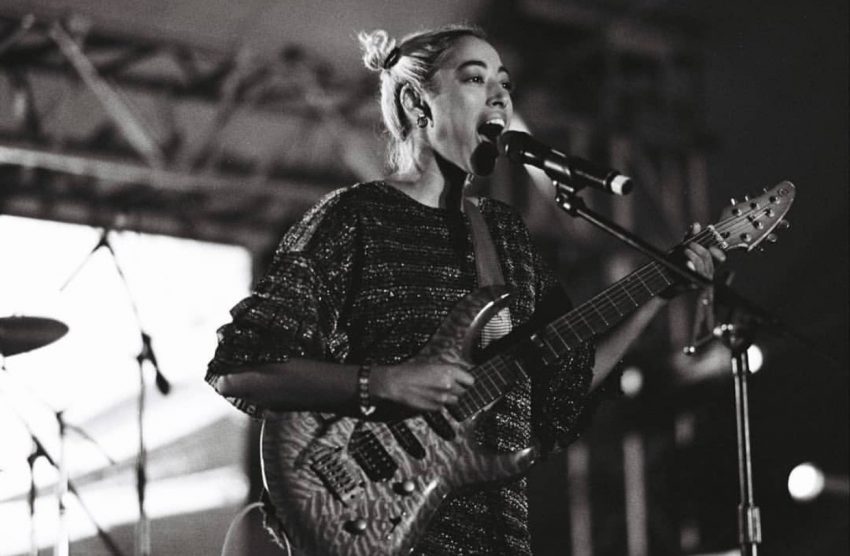 “I allow the feeling to guide me rather than the idea of writing a good song. My music is very feeling driven.“

Red Robyn is a multi-instrumentalist, singer/songwriter from Durban, South Africa whose music is thoughtful and moving, described by the singer as alternative pop/folk-soul for dreamers.

Her latest track ‘I’ll Stay The Same’ is taken from her upcoming EP called ‘Girls Wear Pink’. It is an upbeat ode to coming to terms with letting go after a tumultuous break-up and holding onto your self-worth. The layered harmonies, electronic beats and Red Robyn’s silky vocals make for a charming, catchy and hopeful track.

It was a real pleasure to speak to Red Robyn about her latest track, her musical origins and what she wants to be remembered for…

What inspired your stage name ‘Red Robyn’ and why did you decide to not go by your real name?
My stage name actually comes from my second name Robyn. When I was at university I decided that my real name was too boring so I started researching the meaning of ‘Robyn’. I found the legend of the Red Robin bird that sat on Jesus’ head when he died and that’s how it got its colour. I’ve always loved the story of new life and I thought that would be a perfect fit for me.

How did you first get into music and what inspired you to start creating your own music?
I’ve always been involved in music from as young as I can remember. My parents took me with them to Australia when I was 5 so they could study music at a Christian college and that’s where I wrote my first song on the back of one of my mom’s notebooks. I began taking music more seriously when I was about 16 and I started playing the guitar. A missionary from Argentina gave me my first guitar, taught me a few chords and I never looked back.

How would you describe your style of music to someone who has never heard it and what is unique about your music?
I would describe my music as folk-soul. I think what’s unique about my music is how I write. I allow the feeling to guide me rather than the idea of writing a good song. My music is very feeling driven.

Who are your main musical influences? What is it about them that inspires you?
I don’t really have one main musical influence but I think I would say that Brooke Fraser was very important to me when I first started writing music. I just loved the fluidity of her style and how effortless her voice is.

What is the story behind your latest single ‘I’ll Stay The Same’? What do you love most about it?
When I was writing with Benjamin MCarthy (who produced the song and also helped write) I was going through a weird season where I was with this guy who wasn’t my boyfriend but I had become very attached to him. I had this idea that we’d end up together but he started dating his best friend and my hopes were completely crushed. I would just cling on to the idea that I was fine before I met him and I’ll be fine now that I know for sure that he’s not mine. Ben and I had a great time writing this song. We’d stay up until 4am writing until we had what we wanted out of the song. It was a great time to be experiencing emotions that I could use for writing material , it was also healing in a way.

How has the lockdown had an impact on your music and creativity?
I have not been very creative during the lockdown. I found that I had a lack of things to write about. My days were pretty much the same and I struggled to get into a creative space. I think it was good for me to have that time to reflect and think about the next phase of my career.

Of all the songs that you have ever created, which are you the most proud of and why?
I am most proud of ‘Dust and Iron’ because it was the first song I ever co-produced with my writing partner and friend Sean Ross. We had very few resources but somehow managed to create something that really summed up my identity and style as an artist. It’s also the first song of mine that was featured in a Netflix series that was made in South Africa.

Do you have a dream venue or festival that you would love to play at? Why?
I’d love to play at the Bluebird Cafe in Nashville. I was obsessed with the series Nashville and always wanted to play there ever since I saw it in the series.

What piece of music do you wish you could erase from your mind so that you could experience it for the first time again and why?
I think that would have to be ‘Clair De Lune’ by Debussy. That songs makes me so nostalgic and happy and all the good emotions I want to feel from music. It also has such a healing quality to it. I’d definitely love to hear that for the first time again.

What can we expect from you within the next 12 months? Any releases planned? Future gigs?
I am going to take a short break from collaborating however, there will be some new releases with my partner MISSU (Sean Ross). We worked on some collaborations during lockdown and those will be out in the next few months. I am going to be focusing on recording and documenting the unreleased music I have in my archive for future releases. Also, I will be playing a show on the 5th December for the Nyega Nyega showcase.