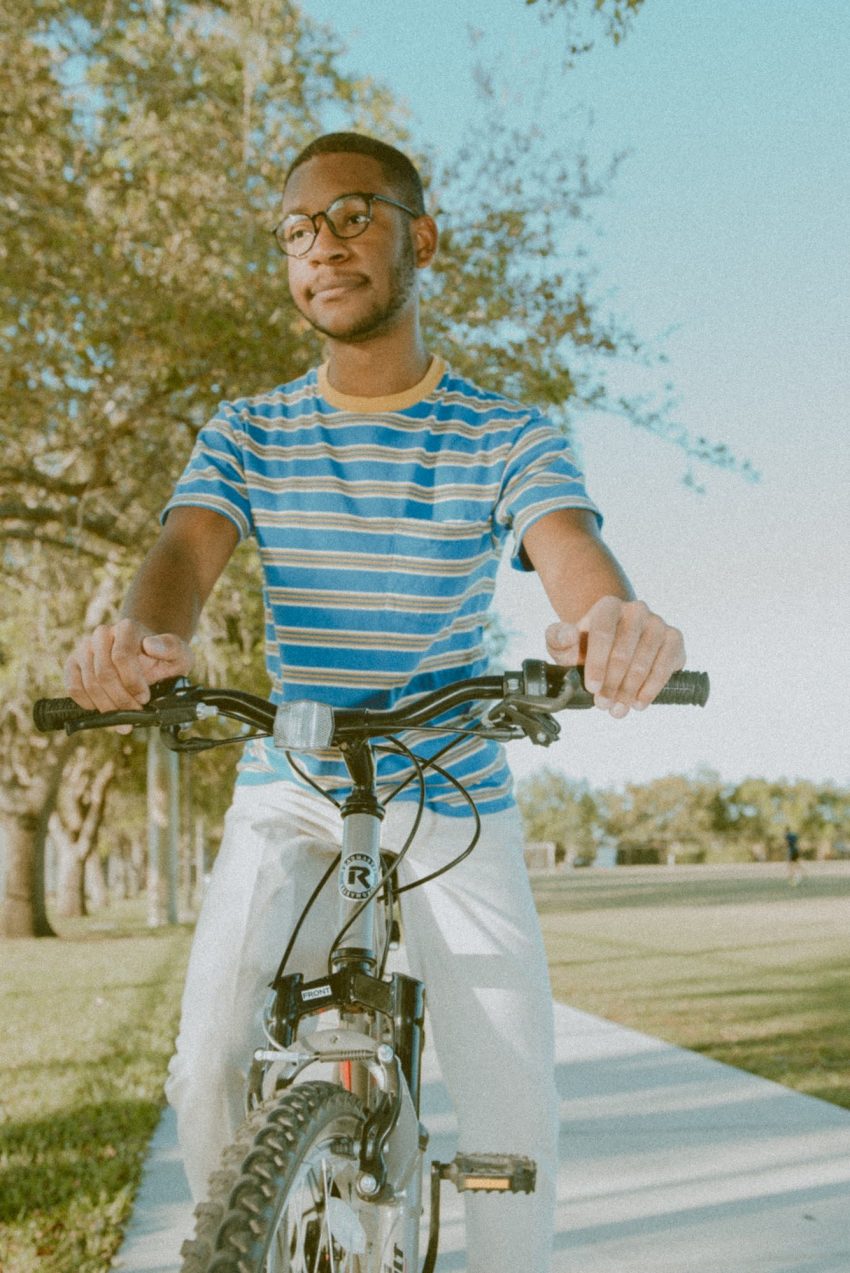 Laurent Chavannes, the man behind Moving in Slow, was born and raised in Miami, Florida and started playing music at the age of eleven. He is a thoughtful and reflective individual and this comes through in his music which is atmospheric, pensive and dream-like. His latest single ‘Going to School’ is a nostalgic treat about longing for a time in our lives when everything felt simpler. It was a real pleasure to speak to Moving in Slow about his inspirations, creative process and favourite gig venues…

What inspired your stage name ‘Moving in Slow’ and why did you decide to not go by your real name?
The name comes from a song by the band A Great Big Pile of Leaves. I like the song, love the band, and found the title of the song interesting because I feel it describes me fairly well. I’m pretty reserved and I tend to take my time on a lot of things. I don’t like rushing things or feeling pressured to do something quickly, so I felt that would be a better representation of my music and personality than just my name.

When did you decide to start creating music? What inspired your decision?
I think I wrote my first song when I was 12 because I wanted to see what it would be like to make a song. The inspiration came from watching videos of some of my favorite musicians play live and seeing them make a connection with so many people by playing the songs that they wrote.

What music did you grow up listening to and which artists had the biggest impact on your sound?
Growing up I listened to a lot of blink-182, My Chemical Romance, and Pavement. However, my sound now takes influence from The 1975, Dodie, Tyler the Creator, Owen, Wallows, Tame Impala, and so many more.

How would you describe your style of music to someone who has never heard it before?
A blend of indie rock, emo, and punk, which takes a little from everything else.

What is the inspiration behind your track ‘Going to School’?
One day, an old friend from high school and I were sending each other old pictures and reminiscing. I had been reconnecting with them around that time so the mixture of reconnecting and thinking about how long we’ve been friends kind of set off a trail of nostalgia. The line “I miss going to school with you” came from me thinking about how I miss those old days when things were less complicated.

Can you describe your creative process?
It varies! Most of the time I start by coming up with a chord progression and some vocals. Other times I might have a lyric or melody that comes to me so I build a progression around that. And on some occasions I’ll just be messing around and I might play something that I like so I’ll make something out of it. I hear a lot of things that I would like to incorporate into my music so whenever I write a new song I try to find a way to incorporate something new into it.

Of all the songs that you have written, do you have one that you are most proud of? And why?
Of the songs I’ve released I think “Pink Shirt” is the track that I am the most proud of. I really like the harmonies that I have in it along with the instrumentals. I feel like the production quality makes it sound like bedroom pop but it also has some psychedelic elements mixed in with some pop punk and indie.

If you could steal credit for any great song, which one would you claim and why?
‘All I Want For Christmas Is You’ by Mariah Carey because it’s just such a great song! I feel that the fact that it gets extremely popular one time a year helps keep it fresh after so many years, but I also think that it’s a great song whenever. I truly think it could stand the test of time as being one of the greatest songs ever.

Growing up in Miami, what great gig venues have you discovered over the years?
A lot of great venues have unfortunately shut down over the years but some that I really enjoyed have been Open Stage Club, the Fish House, Tea and Poets, Churchills Pub, and Space Mountain. Revolution Live and the Culture Room are in the next county north of Miami but a lot of people in this scene have flocked to those venues as well.

Do you have a dream venue or festival that you would love to perform at?
If I were ever able to headline Reading Festival then I think I could rest assured that I’ve made it as a musician. That’s far beyond my reach at the moment though so I’d love to play at Revolution Live in Fort Lauderdale. A lot of great musicians that I love have played there and it’s always been a fun time.

What are you working on at the moment and do you have an upcoming shows?
I’m currently working on some new songs and rebranding myself. I never really had a brand before so I’ve been experimenting with different aesthetics to find one that fits my music and my personality. I’ve been getting into producing and sound engineering so that’s been able to help with my song writing. Unfortunately, there aren’t any shows planned because of the pandemic but I’m planning things out for whenever I do get the chance to play live again!

To keep up to date with the latest news from Moving in Slow, you can follow him on Facebook and Instagram. To listen to his latest releases, head to YouTube, Soundcloud, Apple Music and Spotify.