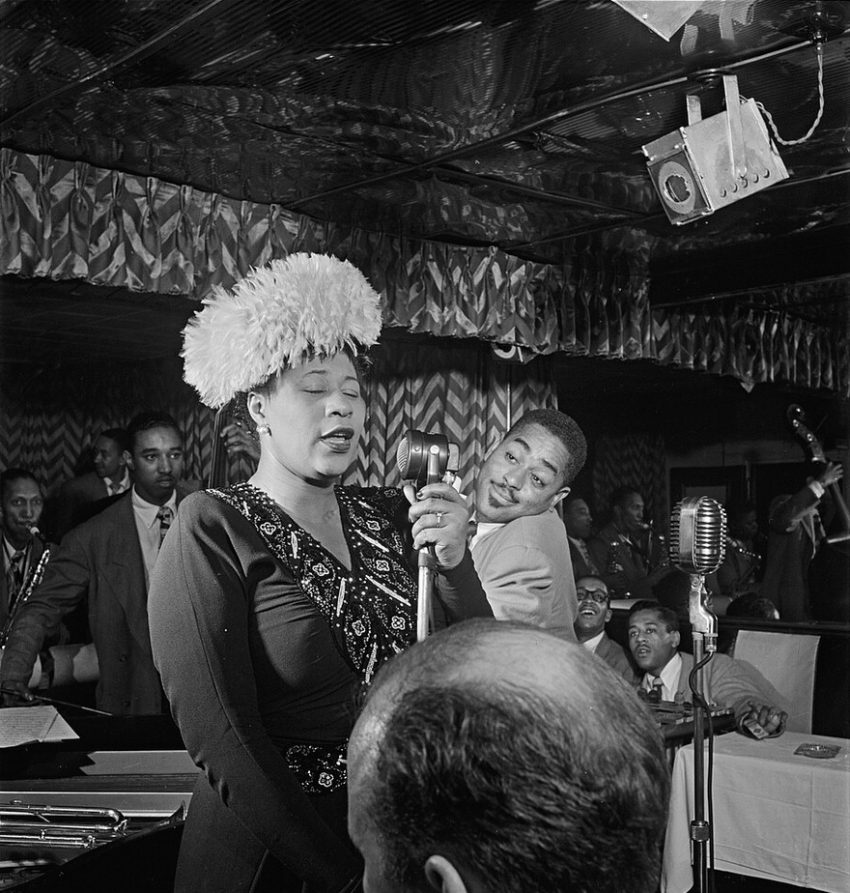 “It isn’t where you came from; it’s where you’re going that counts” – Ella Fitzgerald

The ninety-minute film-documentary Just One Of Those Things, directed by Leslie Woodhead, traces the story of Ella Fitzgerald’s life and career and illustrates her transformation from a teenager living on the streets of Harlem to one of the greatest jazz figures of the twentieth century. Through a mixture of varied live footage, interviews with contemporaries and audio clips of Fitzgerald herself reminiscing about her life, the film recounts her extraordinary story.

In 1934, Fitzgerald performed in front of a crowd for the first time at an amateur night at Harlem’s Apollo Theatre. The audience did not expect much from this young girl wearing a shabby dress and the dancer Norma Miller amusingly recalls how, “They introduced this new girl and we booed her. Can you imagine? We booed Ella Fitzgerald!” However, once she began to sing the audience was stunned into awed silence. This appearance brought 16-year-old Ella to the attention of Chick Webb, Harlem’s top band leader, who asked her to join his band, quickly establishing her as a public and musical success.

Fitzgerald’s life-changing success at the Apollo Theatre’s Amateur Night is put into perspective when the hardships of her youth are explained. She lost her mother when she was only thirteen, was sent to a brutalising reform school and later spent time homeless on the streets of New York.

Fitzgerald was clearly ambitious and her drive, coupled with the unique magic of her voice, was an unstoppable force. She radiates power and passion when she sings and over the course of her career she would embrace varying genres of music, constantly pushing herself to be better. One of the most complete portraits of her incomparable technical ability is shown in the famous audio clip of the singer scatting in Berlin in 1960. Fitzgerald’s breathless five-minute improvisation during “How High the Moon” drew inspiration from show-tunes, jigs, nursery rhymes, folk tunes and symphonies (over forty tunes in all) and is a joyous stream of invention.

The move from jazz clubs to the world stage was secured when Fitzgerald recorded the ‘Ella Fitzgerald Song Books’, a series of eight studio albums, between 1956 and 1964. They represent some of the most iconic interpretations of the musical canon known as the Great American Songbook. By taking the American Songbook to the world, Fitzgerald confirmed her status as a superstar and she is still widely considered to be the definitive interpreter of that genre of music.

The documentary repeatedly touches on the ever-present issue of race which came to define the tumultuous 20th century. “Everything was race. You couldn’t go to Woolworth across the street,” recalls Norma Miller. Fitzgerald’s family’s relocated from Virginia to New York in 1919 as part of the Great Migration, which saw millions of African-Americans move from the rural South to the cities of the North, Midwest and West and America’s musical and political landscape was marked by the consistent refusal of numerous club owners and promoters to engage black artists. This racial climate makes it all the more powerful to witness the glorious rise of Fitzgerald.

As well as exploring racial conflict, the documentary also explores Fitzgerald’s life-long struggle between her passion for singing and endless touring and her desire for a stable relationship and a domestic life with her adopted son. Her tender performance of “A House is Not a Home” feels deeply personal as it accompanies the narrative which details Fitzgerald’s continual struggle to find sustained happiness in her personal life.

The final scene returns to Harlem’s Apollo Theatre, where sixteen-year-old Alexis Morrast sings to the empty stalls, “A-Tisket A-Tasket”, the first song to bring Ella public acclaim. It’s a poignant reminder of Fitzgerald’s humble beginnings and just how far she would go.

Follow the link to watch Just One of Those Things: https://www.bbc.co.uk/programmes/m000jr4f