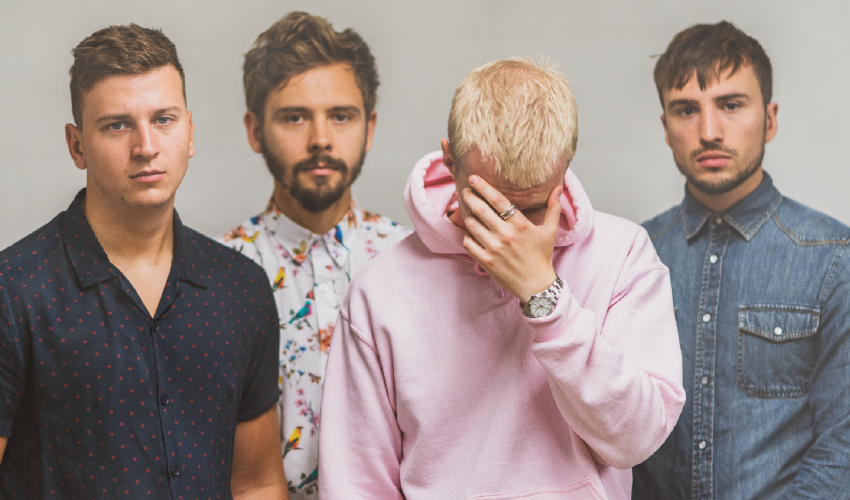 “I think there’s a lot to write about, and growing older I can respect those moments much more”

The Islas, the Norwich-based four piece, have mastered their blend of upbeat, punchy and thoughtful indie-rock since forming back in 2017. The band consists of Nathan Baverstock (lead vocals & rhythm guitar) Ross Allen (lead guitar), Granger Wittering (bass & vocals) and Ed Chalu (drums & vocals). Their debut EP ‘A Generation To Forget’ was released earlier this year. It was inspired by the band’s experience of growing up in the UK and has received consistent plays from BBC Introducing since its release. The buzz this band has created for itself has led to them supporting major acts such as Fickle Friend and The Amazons, earned them the opening spot on Neverworld Festival’s main stage last summer and has seen them build up a dedicated fan base. It was lovely to have the opportunity to chat with Nathan about the band’s latest single, growing up in the UK and swapping lives with Foals for the day…

If you had to play one of your tracks to introduce someone to your music which would you choose and why?
I think it would have to be ‘Aileen’. I think it is the most concise lyrically and I still remember when Ross (lead guitar) first played that opening riff. We left the studio absolutely in love with the way it sounded. I love our first EP because we recorded it all by ourselves and it felt like a great accomplishment, but you can tell straight away from the first five seconds of ‘Aileen’ that it sounds proper.

Your debut EP was released earlier this year in January. What has the reaction to it been like?
We initially released it track by track starting with the title track ‘A Generation to Forget’ which was released in late 2017! Throughout 2018, we released the other three singles and added them all together to create an EP in 2019. The reason behind all this was because we were trying to build up a fan base and we wanted to drip-feed the EP so we could build up a decent following for the next releases, which we knew would sound great as we were prepping to go into a professional studio. I think the reaction was great. People liked it for what it was. It has a very DIY feel to it and it is very raw. On the back of that we gained around 1,000 followers on each platform – so I think people liked its appeal.

What inspired your latest single ‘Back of Your Neck’?
I remember sitting in my room thinking about how I was kind of sick and tired of writing sad songs. So I convinced myself to pick up the tempo with the next chord progression I came across and Ed threw these ‘dance-like’ drum rhythms over the top and it started to feel more like an indie bop. It immediately made me think of Two Door Cinema Club, The Strokes and The Crookes when we starting putting the pieces of it together. Lyrically I also wanted to move a little bit away from the thoughtful lyricism I often try to write – so actually it’s about a one night stand that didn’t go so well…

Your lyrics are typically inspired by youth and the experiences of British adolescents growing up. What did you love most about growing up in the UK?
I loved growing up in the UK. Looking back at school I loved the people I met, the sacred lunchtime kick about and the first loves. I think there’s a lot to write about, and growing older I can respect those moments much more. Because I’m older I’m more articulate and I can put into words how I’ve felt and how I feel. A lot of our songs are centred on adolescent experiences like nights out, the struggles of being in a band, jobs and how political points of view are so diverse and divided right now. I love all that, and I love writing about it.

How did your experiences of transitioning from a teenager to an adult inspire your music?
As I got older, I read more books and started working a full time job which made me appreciate my upbringing so much more. I didn’t really have a good relationship with my mum growing up and I wrote a few songs about that and how I struggled with other relationships because of it. I’d like to say I’m a thoughtful lyricist.

Your most streamed track on Spotify is ‘Aileen’. Why do you think that is?
I think it hits you from the off and you kind of know what’s in store within the first couple of seconds. It has a few curve balls in there as the arrangement and the chord progression feel quite edgy but overall I think it’s very likeable. We’ve been told it’s reminiscent of early indie bands like Arctic Monkeys, Strokes, Hippo Campus and Foals – which obviously we’re happy with.

Of all the bands that you have supported, which did you enjoy supporting the most and why?
We played a show in our home city called ’Cub Fest’ and it had some amazing artists including Louis Berry, Night Cafe, Paris Youth Foundation and we found ourselves on the bill just before Anteros who I fell in love with after that gig. The lead singer was immense and the whole band had some brilliant hooks and sounds. The event itself was really fun, loads of people turned up early to see us which was incredible.

What has ben the proudest moment of your career so far?
We’ve had some great highlights so it’s hard to pin it down but my top three would be ‘Aileen’ being featured on Spotify’s Hot New Bands playlist, opening Neverworld festival and having ‘Back of Your Neck’ featured on This Morning. That last one is pretty fresh and it was really surreal!

You have previously said that you have been inspired by Queens of the Stone Age, Foals and Nothing but Thieves. If you could swap places with one of the bands for a day who would you choose and why?
The others would probably disagree but it has to be Foals for me. They’ve just released their two part album and I listened to part 2 last week and just thought “what is the point of picking up my guitar anymore” because it was just so incredible. It’s a truly fantastic record.

What are you working on at the moment and do you have any upcoming shows?
We’ll be back in the studio again soon, working with a really cool name in the indie music world and we cannot wait for the experience and to hear how the tracks turn out. We’re also off to France today which will be our first ever gig outside the UK! I’m also really looking forward to writing more and seeing what we can achieve together – exciting times for us Isla boys. We can’t wait for 2020!

Follow the links below to discover The Isla’s music: