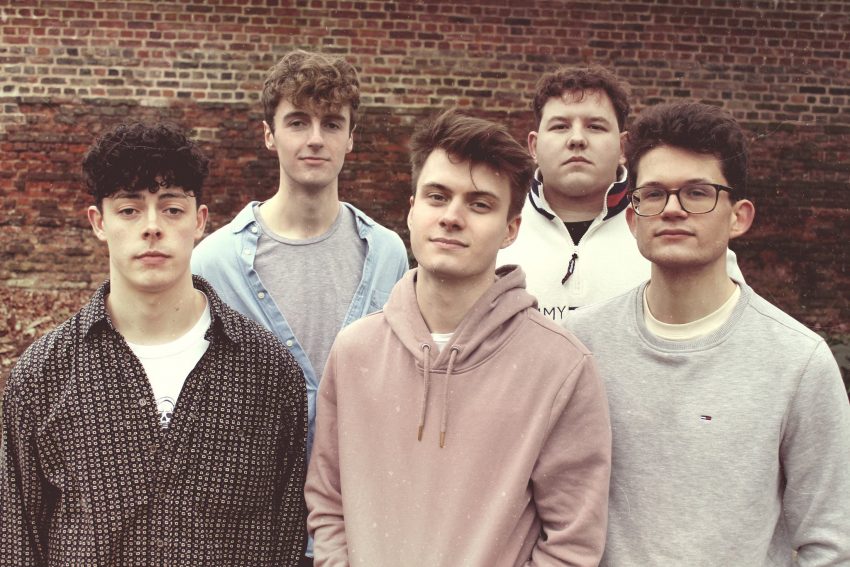 Bedroom/Boredom, dubbed “the next big thing” by Paul Mcartney, are the London based 5-piece making a name for themselves with their memorable and laid-back indie tunes. Their crisp drums, punchy guitar riffs, funky saxophone melodies and energetic vocals are a real treat for the ears. They released their second EP ‘TV Brain’ at the end of May and it will make you smile, bop and sing! They are currently touring the UK and it was great to have a chance to chat to guitarist Jack Collins about the band’s beginnings, weirdest gigs and their latest EP…

So how did you all meet? And how was Bedroom/Boredom born?
Most of us met at school but we met Max at college. We formed out of two bands, one rock band and one joke band which consisted of covers of sexy 80s tunes. We were good mates, so we decided that it made sense to bring the two bands together.

What sort of artists and bands inspired you to start making music?
Depends who you ask. Ben is into metal, Dan is into spicy indie, Mark is into hip-hop. We all have our different inspirations. We all share a love for Africa by Toto, though.

Has there been one particular moment in your musical career so far that you’re most proud of?
We recently hit over one million streams, which is absolute madness. I’m happy that we have played loads of great venues all over the place, met some really cool people and played with some sick bands.

Your newest EP is has just come out. What has the creation process been like compared to your first EP? Any challenges? Favourite parts?
We did a lot more in the production stage than normal. You will hear more synths, extra guitar parts, more vocal harmonies. We wanted the production to be involved more in the writing of these tunes. The biggest challenge was getting us all together to record the EP. We all have our own commitments unfortunately and it took us a while to wrap up the recording. My personal favourite part is all of the mad parts we added to the ending of ‘Youthless’.

What are the main themes that the EP deals with and what do you want people to take away from it?
The EP was recorded at different stages over the past year or so, which shows how differently we’ve been working with each other. Music wise, we’ve written some summertime tunes to bop along to with a can of bud light under a tree in priory.

How did you prepare for your June tour? And what have you been most excited for?
Practice, practice, and beer. We are always excited to play to some new faces and places. We love performing in new venues, and playing in a new area is always a good laugh.

In a previous interview you said that ‘Pill’ and ‘Lemon’ were your favourite tracks to play live? Is that still the case or do you have some new favourites?
The original songs are always fun to play, but we are having a lot of fun playing all of the new songs, particularly ‘TV Brain’ and ‘Chilly’. ‘Where’s Kelly’ is another favourite of ours, we normally see a few people singing along!

Being based in London, what great gig venues have you discovered over the years?
We think Hoxton Square Bar & Kitchen is great. Our favourite by a mile is The Borderline.

Can you describe the weirdest gig that you have ever played?
In our first year Dan told us that we were playing a festival in Winchester, but we didn’t know the details until the week before. The only festival close by was Boomtown (didn’t want to doubt ourselves, but we knew Dan didn’t have any contacts like that). It turned out that it was a free day festival in Windsor – we played to our girlfriends and one of the organisers because every band left off as soon as they played!

If you could steal credit for any great song, which one would you claim and why?
‘Kiss From A Rose’ by Seal, because it is perfect in every way.

You are about to get into a fight, what song comes on as your soundtrack?
‘Don’t Stop Me Now’ by Queen (immediately thought of that scene in Shaun of the Dead).

What are you working on at the moment?
Tour logistics and practicing for our function band set for our manager’s wedding. We’re also trying to get a sponsorship from Heinz Beanz!