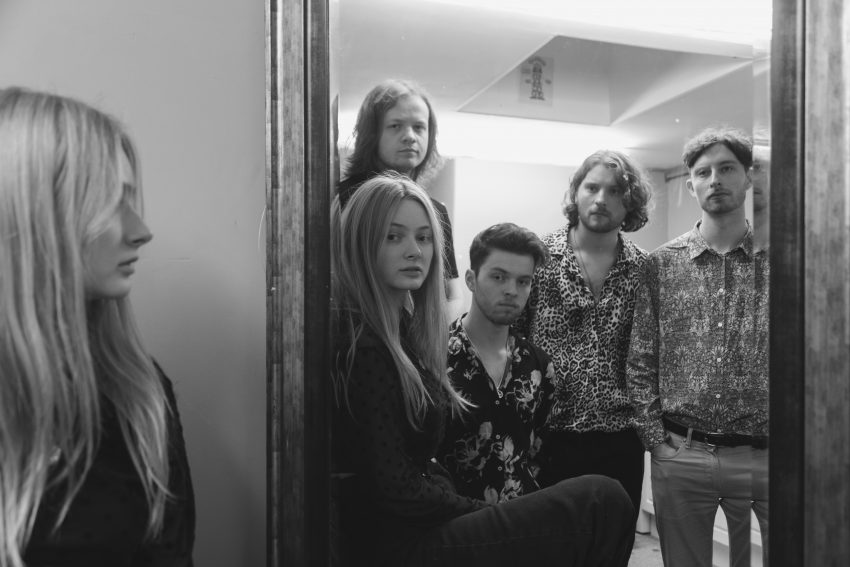 Since forming back in 2017, Djuno – the Southampton-based indie-rock quintet – have been making a name for themselves around the South Coast and it is easy to understand why when you listen to their dynamic blend of driving guitar riffs, punchy percussion and emotive vocals. This week I caught up with lead singer Courtney Gray to chat about the band’s latest single ‘Funny Record’, their top feel-good tracks and performing live…

When did Djuno form as a band? What inspired you to make music together?
We formed Djuno in April 2017, which now seems like such a long time ago. The thing that inspired us to make music together was each other. When we first got together, just to jam and hangout, we really connected as friends as well as musically. We wrote a few tunes and thought it just worked, so, we kept on writing.

How did you come up with your band name?
It came to us in a dream one cold winter night…
Honestly, at the time we were chilling at Andy’s (guitar/backing vocalist) place and on his wall he had a poster of a bunch of different star constellations. We found Juno and since then we’ve added the D for a bit of pizzazz…

Who/what are your biggest influences?
There are five of us in the band and we are all influenced by so many different artists. I know the guitar boys, Simeon and Andy, are really into Idles and Fontaines DC. Our drummer Pete absolutely loves Muse and bass man Toby’s influences right now are Foxing, Manchester Orchestra and Hiatus Kaiyote. Personally, I am a big fan of Black Keys at the moment and they are my latest influence along with Marmozets; their angsty energy really gets me going.

How do you describe your music to people?
It is moody and energetic rock. If you can’t imagine what that is like…come to one of our live shows and you will understand!

What inspired your latest track ‘Funny Record’?
‘Funny Record’ came about when we were messing around with a different vibe to what we were used to. In contrast to our previous tracks ‘Howling’ and ‘Stop’, ‘Funny Record’ has a more urgent message and feeling to it. The song is a reminder for people to be careful not to get sucked in by the media which can sometimes be manipulative and can often feel really one-sided. It can leave you with the sensation of being stuck on a broken record that is on repeat, and really, ironically, it is not funny at all.

Of all the songs that you have released, which is your favourite and why?
Without a doubt my favourite track of ours is ‘Howling’. When we play ‘Howling’ live, we start by all just making a bunch of noises before kicking into the intro. It brings the energy of the room up immediately. I get a really euphoric feeling every time we play it live.

Who writes your songs? Could you describe your music-making process?
For most of our tracks Simeon and Andy (guitarists) will come up with a big riff for a chorus and some chord ideas for a first verse. Then, they bring that idea to a full band practice and the rest of us will make some noise over that until we have a song. Voilà!

What constitutes a good live performance in your opinion? What’s your approach to performing live?
For us, a live performance adds a whole visual experience for the audience. You can listen to our tracks online but adding a live performance to it changes how you interpret the music. Our live shows consist of lots of energetic movement. We jump around and swish our hair about a lot! It is a show at the end of the day so we want to give the people something to look at as well as listen to.

What tracks always put you in a good mood?
Well, there are five of us so here is one from each of us!
Courtney (lead singer): Bruno Mars – ‘Perm’
Pete (drummer): Muse – ‘Plug In Baby’
Toby (bassist): Enya – ‘Orinoco Flow’
Simeon (guitarist): Kurt Vile – ‘Walkin On A Pretty Day’
Andy (guitarist, backing vocalist): Fontaines DC – ‘Liberty Belle’

What are you working on at the moment and do you have any shows coming up?
We are working on as much new music as we possibly can and also working on adding to our live shows. We also have a summer full of gigs coming up and we are going to be announcing the dates soon which we are all super super excited about!