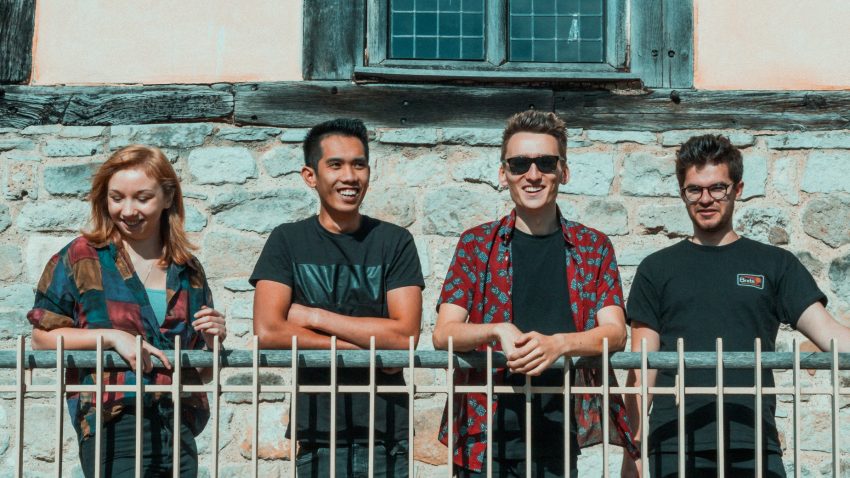 Myriad, the Southampton based indie pop-rock group, launched a campaign last month to celebrate 12 individuals who play an important role in Southampton’s growing music community. They have shared a photograph of each of these individuals on their social media and written descriptions about their commitment to the local music scene. Often those who work behind the scenes can be overlooked so it is wonderful and heart-warming that Myriad are spreading awareness of the important jobs that deserve more recognition.

The band released a single, ‘Castle of Sand’ to go alongside the campaign. The track recognises the importance of individuals and communities in maintaining and strengthening the music scene which “wasn’t built to last” without support. It was wonderful to chat to the band this week about their campaign and the Southampton music scene…

How did you decide which 12 individuals to feature?
So the individuals were all people we knew well and each one represented a particular aspect of the music scene.

Since we are a band, we thought it would be insane not to have a song to go along with the campaign. Our song ‘Castle of Sand’ was perfect because we were able to relate so many of the lyrics to our campaign and it has 12 letters (so we could feature 12 people)!

Do you think that the people who are behind the scenes often get overlooked?
Absolutely! Many of them are well known to local musicians but not to the general public. Their great work absolutely needs more credit.

How would you describe and rate the music scene of Southampton?
11/10! It is not perfect as there is always room to improve, but it is definitely 11/10 in terms of how positively it is growing.

What do you love most about the Southampton music scene and what do you think it will look like in the next ten years?
What we love most is the positive community of dedicated people who have been working hard behind the scenes for the past few years. Everyone who loves music in Southampton is using their own skill set to bring something different to the music scene.

If you could wave a magic wand, what’s the one thing you would change about the Southampton music industry or the UK music industry?
We wish there could be even more opportunities for small/upcoming musicians. What we have is great, but our scene would be truly perfect if we had, for example, more local management teams or big independent record label representation. It would really help artists refine their music and develop the talent that they already have.

What are your favourite music venues to play in town?
Personally we think Heartbreakers, Joiners, The 1865 and Suburbia are all great small venues!

Name a musician who you’d like to see move here?
Catfish and the Bottlemen of course.

Finally, what are you working on at the moment and do you have any upcoming shows?
So recently we’ve been working on a music video for ‘Castle of Sand’. Once that is complete, we will be preparing for a BIG summer release! Until then we have a bunch of shows including:
– 16th May @ Suburbia
– 1st June @ Royal Victoria Country Park Chapel
– 24th August @ Victorious Festival
We have loads of other shows and festivals that we haven’t announced yet so make sure to go follow our social media to keep up to date with all our news!

Follow the link below to discover Myriad’s music and to discover more about their campaign: