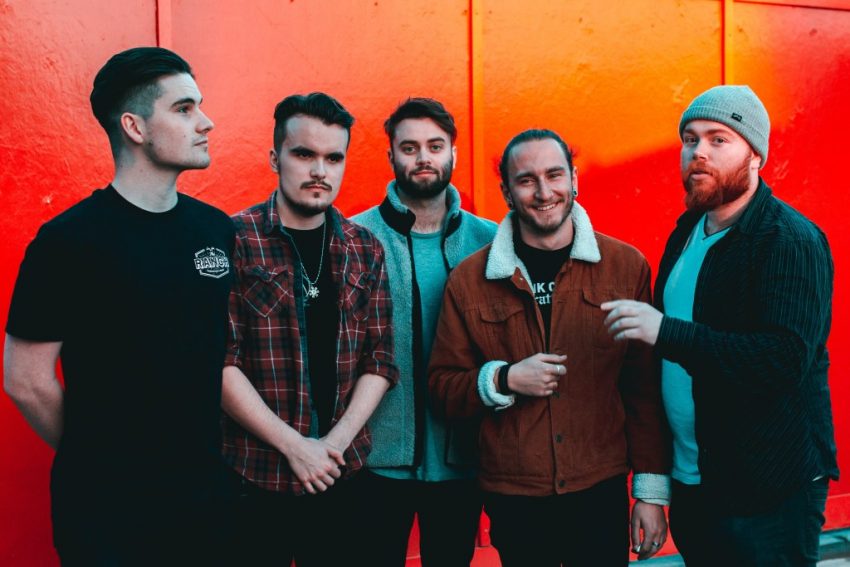 Jetski Babylon, the alternative rock quintet hailing from Southampton, are fiery, passionate and oozing with attitude. Earlier this year, they released two new singles ‘Hollow’ and ‘Nine’ which are their most proficient works to-date. Both tracks are brooding, atmospheric and absorbing and will leave you wanting more. This week I got to chat to the band in more detail about their new music, favourite music venues and their recent tour…

You say you formed out of a mutual love of Johnny Greenwood and Josh Homme. What is it about these artists that you love so much?
Olly (vocalist) is a massive Radiohead fan. He could tell you any fact about ‘The Bends’ or ‘OK Computer’ off the top of his head. It’s what he bases his vocal style on and because he’s so dynamic, it works. We all love big riffs which is why we love the music of Queens of The Stone Age. However, our influences are far more varied than just those two. We love the Foo Fighters, Basement and all different kinds of rock-alternative inspired music.

How would you describe your style of music?
It comes under the general umbrella of alternative rock, but there are loads of different elements in there. We all have such strong and different musical tastes. Joe (guitarist) likes Fatherson which is alternative rock. Tom (drummer) likes The Story So Far, old school pop punk. Max (guitarist) likes the Architects and Periphy which is progressive metal. Then, George (bassist) loves the rock band Stereophonics.

How did you come up with your band name?
That is a funny story. It was a bet between Olly and our friend and now photographer Rory Smith. The two words came out of a conversation about something or other, and Rory was INSISTENT that you would never call a band that and now 18 months later he is still eating his words because he’s got two t-shirts with that band name on it.

What inspired your latest tracks ‘Hollow’ and ‘Nine’?
They are more mature than ‘Reverie’ (our debut release), because we took more time to write them. We had them in the bank before we released our first record. The big bass riff in ‘Hollow’ is similar to a Radiohead riff from years ago but with a Jetski twist. It is definitely about a woman to some degree. ‘Nine’ is anthemic! It is one of those huge songs with a massive breakdown at the end during which we can all go a bit mad, especially Joe and George. In terms of what influenced it, there are some really cool chords in there which have a Redwood vibe that continues on towards the end with the shift from soft to hard.

What do you feel is the best song that you have ever released?
It is hard to nail down just one. Obviously, we are loving Hollow and Nine at the moment. They are fresh and everyone seems to be enjoying them. When we released ‘Reverie’ we were dumbfounded by how many people listened to it and shared it. Especially the singles ‘I Like it When’ and ‘Holdin’ Up The Wall’. They went down so well on streaming services and at our shows. We were so grateful that everybody enjoyed them.

You’ve just finished a stint of touring. Where did you perform and what were your highlights?
So we only did a little trip this time round. We were in Birmingham, Bristol and London and then we had a home show at Heartbreakers. The home show was definitely a highlight. There was a really good turnout and all the acts that played were awesome (Georgia Turnbull, Daphney, Toreador). During ‘Better Days’, George managed to get the whole crowd to sit down which was really fun. Other highlights include Tom’s infamous drunk nachos, having a bitter train driver call the transport police on us because he thought we were playing on the tracks (we gave the police a sticker and a CD and it was all fine), driving round the really rough parts of Bristol and Birmingham on the way to the venues and George being really inquisitive when he is out and about and wanting to know WHERE EVERYTHING IS. It was incredible to play in some new places, meet some new people and watch some other great bands perform.

If you could be any musician or band in the world for a day, who would you be and why?
Olly – I would definitely be Thom York (lead singer of Radiohead). The composing element of Radiohead’s songs would be interesting to experience.
Max – Tremonti
George – Kelly Jones (lead singer/guitarist of Stereophonics), just so I could get away with the ridiculous Welsh flag he parades everywhere!
Tom – Eddie Thrower (drummer for Lower than Atlantis). He was in an amazing band and he has got such an amazing work ethic which allows him to travel the world with bands of all different genres. I met him in passing once and he seems like such a humble guy.
Joe – Ross from Fatherson. He is such a nice guy with a huge vocal range. I would love to have the range that man does.

What song couldn’t you live without?
Of ours? Definitely the new tunes we are writing. They are some of the best material we have ever written. We can’t wait to share them with everyone later in the year!

Tom – ‘Basement’ by Aquasun. It has such a good riff and it helped me to develop as a drummer and it is fun to listen to.
Olly – ‘Talk Show Host’ by Radiohead. This song is the whole reason I got into the band and music.
George – ‘Traffic’ by Stereophonics. Looking at all the people walking by is an interesting concept to write a song about. Or ‘Same Size Feet’ by Stereophonics. Again, to write about a tragedy, like a body in a lake that is someone’s son/daughter/husband, is very moving and a nice emotional touch is always good.

Tell me about your favourite performance venues.
Joiners in Southampton! It is less of a venue and more of a family environment to us. We have been involved with that venue from the start, and everyone knows us (it helps that George and Olly work there!). We get treated well and it is always a good vibe. To be an independent venue of that calibre and quality is so hard nowadays so we are really grateful for it.

On tour? Exchange in Bristol is great. It is a record and coffee shop in the day. It has a great community, the staff are fab and the sound and the stage are top notch. Sunflower Lounge and The Flapper in Birmingham are good. Olly has been going to those two since he was a kid. Craufurd Arms in Milton Keynes is another fun one. Tom has watched a few good shows there.

Basement venues are always fun too! We have played a few of those kind of DIY spaces in the past such as Pipeline in Brighton. We would love to get a show at Hope and Ruin or Green Door Store but our time will come, hopefully….

What are you working on at the moment and do you have any shows coming up?
We are always working on new tunes. We are going back to The Ranch next month with Neil Kennedy to record another few tracks. We are really excited. It is going be fun because we haven’t ever actually spent that much time in the studio (4 days). We’ve got a show coming up with some good friends of ours Death By Shotgun (Bournemouth based surf rock legends) and All Better (Brighton based dirty pop band). We are also booking in dates for the rest of the year so expect new tour dates and new music in 2019!

Follow the links below to discover Jetski Babylon’s music: