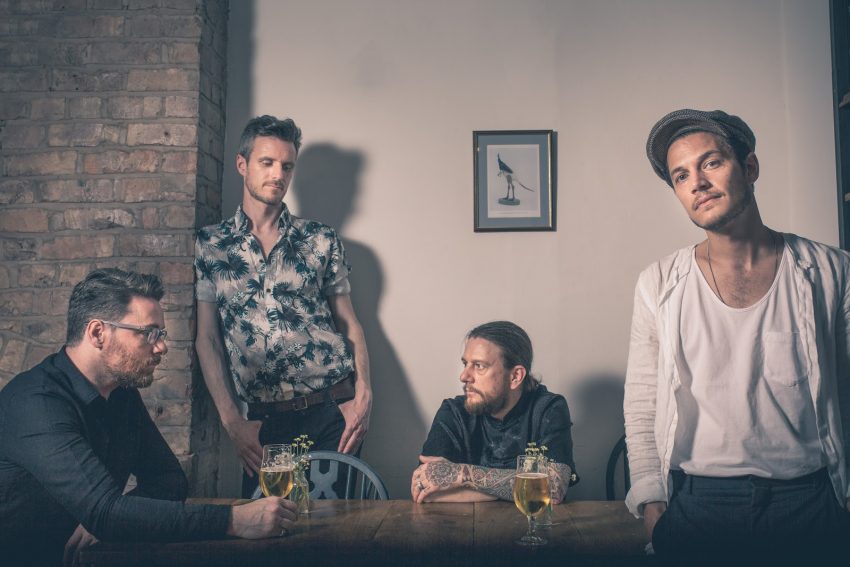 “The goal each night is the same – to be honest, to be sincere, to make the most of every second”

Manchester’s The Slow Show released their latest single ‘Sharp Scratch’ last month, their first single in over a year. The track is both fragile and dramatic. It begins gently with soothing acoustic guitar, gentle piano chords and atmospheric strings. Gradually the track builds to a powerful climax and then instantly drops back down to a stripped back landscape. It is sweetly sorrowful and will leave you feeling both wistful and warm. This week it was a pleasure to chat to The Slow Show about their latest single, the upcoming release of their third studio album and all things music….

So you’ve been making music together for nearly ten years now. What makes the band click and what do you love most about being a band?
We’ve been through so much together as a band and of course as friends. The care and understanding we have for one another allows us to be incredibly honest musically. We can perform personal songs and discuss delicate subjects together with freedom. The openness we have together is precious. It wouldn’t work otherwise. We have nothing to prove to one another. There’s no facade, there can’t be – we’d see through it immediately.

‘Sharp Scratch’ is your first single in over a year. What inspired it and how long did it take to write?
‘Sharp Scratch’ is a song about ill health and the associated anxieties and emotions surrounding the subject. It was written during a difficult time personally but was heavily influenced lyrically by the moving Paul Kalanithi memoir ‘When Breath Becomes Air’.

Have you enjoyed the process of making your third studio album? Any challenges? Favourite parts?
We decided to take more time writing this album compared to the second one which naturally created a more relaxed and unhurried environment. Our personal situations have changed a little with some of us moving away from Manchester. Rather than that being a hindrance it actually resulted in an improved workflow. Every few weeks we would have an intense few days together, feeding our ideas off each other, trying new arrangements, experimenting with instrumentation etc. Then we would head back to our homes to digest this and work on the next ideas. I guess it was unhurried but efficient at the same time. The favourite parts are perhaps recording with the extra musicians. We were able to involve some amazing brass and string players as well as a fantastic choir.

How has it compared to your previous two albums?
Even though the instrumentation is similar to our previous work, we feel we used it in a much more diverse and experimental way. The emotions are more extreme. The blacks are even blacker, the whites even whiter.

Of all the songs that you have written, do you have one that you are most proud of? And why?
‘The Fall’ is a song we wrote after receiving an incredibly moving email from a fan some time ago. The subject was so delicate we were reluctant to write about it but the story moved us enormously and it eventually found its way into this song. When I hear it back I feel we’ve written it with the respect and care the story and subject deserve. If this was ever in question it wouldn’t be on the record.

What was the best compliment you’ve received as a band?
Simply hearing that people relate to our music is incredible. If we can have an effect or move people in some way then we’ve achieved our goal. It’s an incredibly humbling thought.

If you could tour or collaborate with any band or artist who would it be?
We’ve already had the good fortune to perform live with a choir and small orchestra and we’d love to do more of that in the future.

Where do you usually go when you have time off?
We’re all living in different cities/countries now so when we’re not on tour or recording we all go back to our respective homes and normality resumes!

What are you looking forward to in the coming months and do you have any upcoming shows?
We’ve spent so long writing and recording this record so we can’t wait to play it live. The intimacy and simplicity of touring are both things that we love. The goal each night is the same – to be honest, to be sincere, to make the most of every second. We’re on tour in April and dates can be found on our website.

Follow the links below to discover The Slow Show’s music: