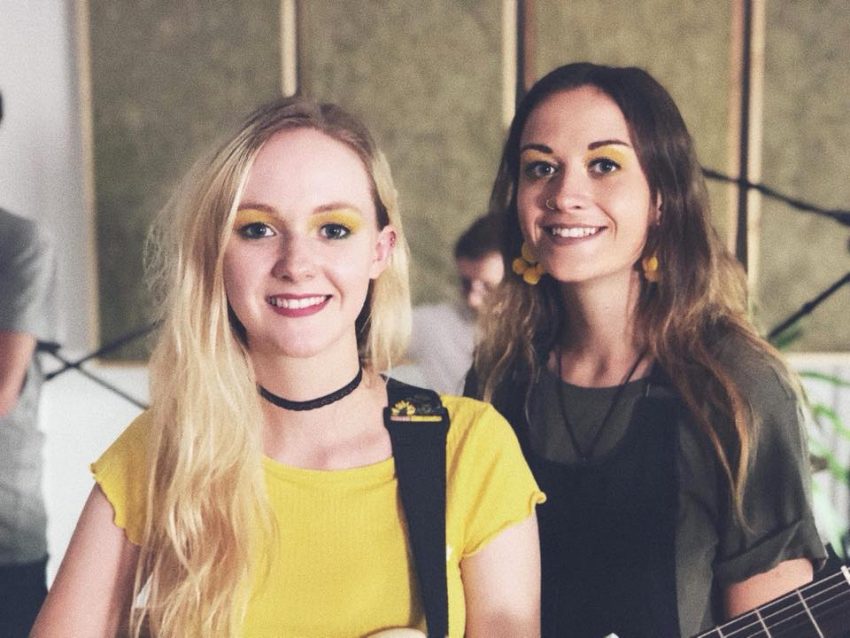 Let me introduce you to Sunflower Thieves, the female-fronted pop-folk band. Add them to your playlist now and their blissful harmonies will give you shivers, their heartfelt lyrics will move you and their catchy melodies will follow you around all week. Their latest single ‘Two Halves’ is magical and enchanting. It is about a friend who has lost her memory and the experience of starting a friendship and getting to know someone all over again. I cannot get enough of this track at the moment so understandably, I was very excited to chat with Amy and Lily about all things music…

So, how long have you known each other? How did you meet?
We have known each other since we can remember and have been through primary and secondary school together and both chose to go to the same university!

And how would you describe your music to someone who has never heard it before?
We’re never entirely sure how to describe our sound, but we normally say it is pop-folk music. It fits into the ‘indie’ genre and one of the  most important parts of our sound is the close female harmonies.

How has your music developed over the year?
We feel this new single is a huge step up from our previous release. We are very proud of our debut EP but it was the first original set of work we had and our confidence and exploration in our music has developed significantly since then! We had previously been living in different cities but we are both based in Leeds this year so it has been great to be able to write and rehearse more together. We have also developed our band’s sound. We acquired new members and are revamping our current set. We’ve brought synth sounds into our new set with the band and more electric guitar. However, we still play plenty of gigs, such as Sofar Sounds gigs, with our original set up – just the two of us and an acoustic guitar!

You released your single ‘Two Halves’ at the start of September. What has the response been like since it came out?
The amount of support, both local and otherwise has been amazing! We’ve done a live session for BBC Introducing East Midlands and are currently booking in to see the guys at BBC Introducing in Leeds too which is really exciting! We’ve also done some local live sessions, lots of interviews with exciting bloggers and music reviewers. We’re really lucky to have a really strong network of support particularly at home in Derbyshire, in Nottingham, and in Leeds.

The track was also included in Spotify’s Release Radar the week after release and the live videos of the track that we have shared on our Youtube channel have been really well received too. Especially important to us is the support we have received from platforms, groups and reviewers online who particularly celebrate and shout about females in the industry. Being a minority, it is amazing to see the amount of support out there for girls, women, non-binary people etc, who are doing their thing and the encouragement from these people has been invaluable to us, as well as all the other brilliant people who have shared, reviewed, commented, blogged and listened! 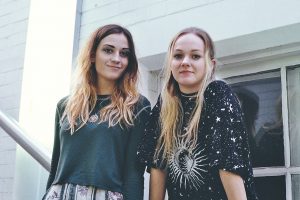 Who writes your songs? What are the main themes or topics for most of your songs?
We both write, often separately initially, then bring our ideas together to improve and arrange and then to create the finished tracks! We are a DIY band – Lily records, mixes and produces all of our tracks before they are sent off for mastering. We tend to write from personal experience, about things that have moved or affected us. This means we write about some heartbreaking subjects but we always try and emanate positivity in our music. Subjects relating to friendship, loss, strength and love are common themes in our music so far but we have so much more to write which is a really exciting concept!

Do you remember the first song you ever wrote? What was it about?
We went along to a songwriting workshop together and collaborated with a local musician who was really encouraging about us writing our own music, as we had been covering other artists for a while. The song was called ‘She Paints Her Face’, and it was quite a pop-y acoustic track, about being a young girl with lots of pressure and expectation. It was a made up scenario and character but it was a great way to learn about storytelling through our music and it inspired us to write!

Who are your major influences?
We both have our individual inspirations but the top ones from when we began writing are probably Lucy Rose, Gabrielle Aplin, Lewis Watson and First Aid Kit.

If a pop artist and a folk artist came together to collaborate, which two artists would you choose and why?
Amy: At the minute I’m obsessed with Sigrid as a pop artist. I love the attitude she represents, the image, and her huge voice! My other artist would be Jade Bird, who is more blues/country than folk, but again has an incredible voice, and her lyrical quality inspires me a lot. They also seem like really genuine, nice people!
Lily: The Staves, and Darwin Deez. The Staves’ amazing harmonies and Darwin Deez’ electronic sounds would be so ace.

What advice do you have for people who want to start their own bands?
Do it!! And do it because you love it, for whatever purpose you’re creating music for. There is a lot of pressure for certain bands or people to sound a certain way, or be the best at a particular thing, but as long as you love it, and you work hard at it, that’s the best way to be!

What are you working on at the moment? Do you have any upcoming shows?
We are about to start demoing a new single, which is super exciting. All gigs announcements, release info and news can be found on all of our social medias, and on our website too.