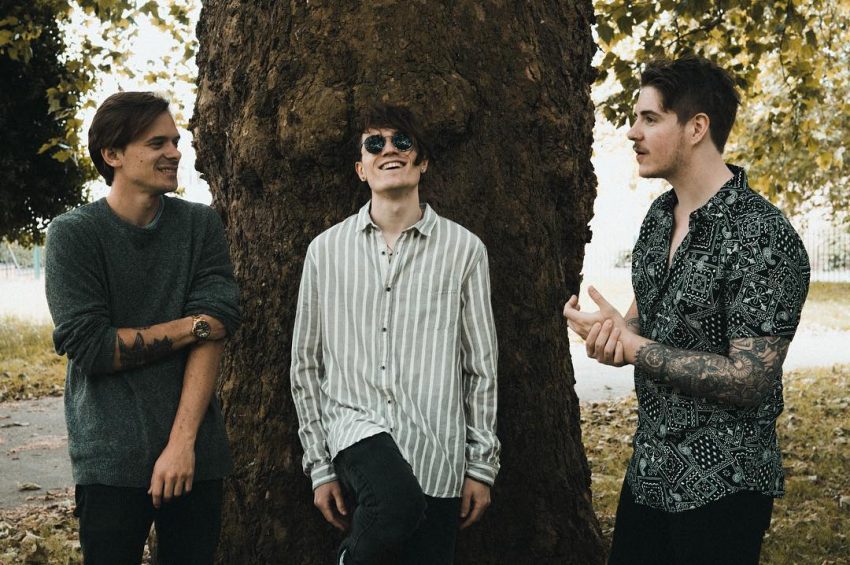 Fast Car To Florence, the Nottingham based trio, released their debut EP earlier this year in an innovative and free, five-day interactive online experience. It focuses on the turbulent highs and lows of the period between your late teens and early twenties and how to navigate through those emotions and feelings. With their 1975 vibes, catchy melodies and inventive lyrics, they have crafted a familiar yet original sound. They deserve every success and I can’t wait to hear more from them. Guitarist and vocalist, Issac Elliot-Anderson, took the time to discuss their debut EP, standout shows and future plans…

Where did your band name come from?
We never have an interesting answer to this! It doesn’t really mean anything, to be completely honest. It’s just a phrase that popped into my head one day – I wrote it down, forgot about it, and then came back to it when we were brainstorming names. It just seemed to fit. I guess when the band first started I’d just got my first car, and I went to Italy for a bit, so maybe that’s some kind of subconscious connection? Although that’s definitely clutching at straws. It wasn’t even anywhere near Florence.

How did you come together as a band? And why does the band click together?
Myself and Chris (drums) met through playing weddings every weekend, up and down the country. We’d been doing this for a year or so and had developed a good musical relationship (as well as a mutual sense of resentment towards cover songs) so we started jamming some demos that I’d written on my own. It took a while to get off the ground but we met Mike (bass) a few months later through an ad we put out for a bass player online. It turned out when he got to a rehearsal that me and him had actually toured together years before in different bands without realising! It was very weird, but quite a nice way to get things started.

Who or what first got you involved with music/songwriting?
Music is something we’ve all done as long as we can remember, and we’d all had experience playing in lots of different bands – right from our formative years all the way up until we started this one. We had also all been playing music full time as professionals for a good few years – function work, session work, etc – so it’s basically our lives, and would feel very strange to do anything else. As far as writing goes, I always had a bit of an overactive imagination as a child. I originally wanted to be an author when I was really young, and I used to write loads of stories and ideas for films. Those stories gradually turned into songs when I started playing guitar and songwriting has been something I’ve felt very passionate about ever since I was about ten.

What does each band member bring to the songwriting process?
I’ll write and demo the song in full and then I’ll bring it to Chris and Mike, and we’ll pick it apart and play it to death together until we feel like it’s ready. Everyone is really good at recognising what works best for their particular instrument and we have a good sense of what specific parts of the songs need work the most. We’re all very focused and relentless with the thoroughness of the preparation we put into getting a song ready – before we went public, we spent a good six months rehearsing religiously multiple times a week to make sure everything was as good as it could possibly be. 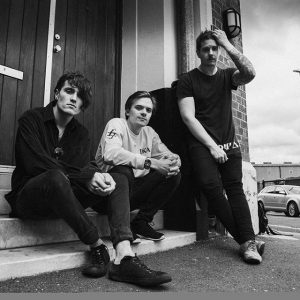 What inspired your debut EP ‘Address the World’?
The main themes on the EP – as is the case with the majority of our songs – are the emotions and situations you face during your late teens and early twenties. It’s a really testing time of life. There’s a huge upheaval of your routine and everything that you’re used to – you might be starting university, starting work, moving out… the list is endless. Relationships – whether romantic or platonic – are put to the test due to those changes in circumstance, and there can be a lot of hurt and confusion in that respect. This whole time, you’re also faced with the challenge of having to figure out what you want to do with your life and how you’re going to get there. ‘Address the World’ is essentially a journey of the navigation of those thoughts and feelings.

Did you enjoy the process of making the EP? Any challenges? Favourite parts?
Apart from the drums, we recorded everything ourselves – mostly in my bedroom – so it was a lot of work, but we’re so glad that we did it in the way that we did, as we were able to retain complete control over the songs. Having said that, it was a bit stressful at times to be honest! For some reason we set ourselves the most ridiculous schedule of cramming everything into a two week period, just before Christmas last year, so it was a huge collective sigh of relief when we got the masters back. We were keen to get it out as quickly as possible really!

You originally released the EP as a five-day interactive experience. How did that work and why did you decide to do that?
We wanted to do something a bit different. We’re well aware that the UK unsigned music scene is a very crowded pool, and we knew, as a new band, we couldn’t afford to just throw up our EP with no context and disappear into obscurity, so we decided to release ‘Address the World’ through this experience. The gist of it was that people would sign up by email, and receive a new song as a free download every day over five days. They’d also get access to a bunch of background info on each track – old demos, voice notes, lyrics, and meanings and influences behind the song.

Personally, I am always SO interested in learning the background behind songs by artists I liked, and I wanted to do the same with our own music – even if it was a very daunting prospect airing very rough ideas and content, and essentially laying ourselves bare. People seemed to really latch onto it though, which was amazing for us. The best thing was that we treated the experience as an ongoing conversation – with every new song that we released, we were able to get comments from people listening straight away, and they could tell us how that particular track made them feel, how they interpreted the lyrics, and so on. By the end of it, our relationship with our listeners felt very, very solid. We feel like we’re in a really good position and completely set to move forward. Even though ‘Address the World’ is now out on Spotify and other streaming platforms, the experience is still ongoing and we’re getting new people signing up every day. It’s brilliant.

You only came together as a band last year but there has already been a considerable buzz about you. How does that feel?
It feels great. I guess it’s a testament to the amount of work we put in behind the scenes before we launched properly, but I still find it incredible that people are so willing to take a chance on a band that’s only a year old. It’s very humbling. We do our best to be as active as possible on social media and make the time to chat to people who make the time to reach out to us. There’s a real connection – a friendship – between us and our fans (as much as I hate to use that word) and it’s wonderful.

Do you have a standout show or festival that you’ve played?
I think our answer would be our first ever hometown headline show last year at Nottingham Rough Trade. It was part of a very small run of dates – the first headline shows we’d ever played – and the room was sold out, with people singing along to songs that had only been out for a couple of months. We didn’t even have the EP out at that point either – just three singles! It was pretty mad.

If you could collaborate with any artist who would it be and why?
I would love to write a song with Max Martin. He basically shaped pop music as we know it… I would love to dive into his head and have a poke around. Plus, I think a FCTF track co-written by Max Martin could be a very interesting beast indeed!

What music are you listening to at the moment?
All sorts. Fickle Friends, Pvris, Enter Shikari, The Xcerts, The Killers and Jon Bellion to name a few. We live in a fantastic musical landscape at the moment and I’m loving it.

What are you currently working on and do you have any upcoming shows?
We’ve are part of the lineup at 110 Above Festival this summer, which we’re so excited about! We have so much more planned for this year though – we want to hit up everywhere across the UK, and maybe even further afield, with loads of dates in the calendar ready to announce soon. Aside from that, we’ll be releasing more songs from ‘Address the World’ with videos, more behind the scenes stuff, and we have even started talks about the production and release of our second EP. But that’s a story for another day…

Follow the links below to discover Fast Car To Florence’s music: